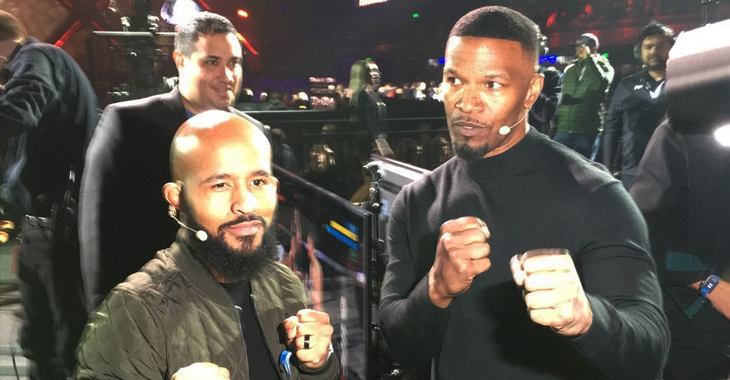 The new EA Sports UFC 3 video game just officially released last night and the EA threw one of those crazy parties you only read about. Of course, unofficial UFC 3 ambassador Demetrious Johnson is the unofficial ambassador was there, styling and profiling. He’s been promoting the game since day one and streaming the beta as well as his early release copy to his thousands and thousands of Twitch viewers. While he’s entered a few high profile gaming tournaments, this is probably his eSports peak. Why? Oh, just because he did it all with none other than Jamie freaking Foxx.

This #Madden game between Travis Kelce and Alvin Kamara is getting heated. @WCCO #EASPORTSBOWL pic.twitter.com/SBZIJQ3Ar8

Your eyes aren’t deceiving you. That’s the UFC flyweight champion playing EA UFC 3 with Jamie Foxx while Odell Beckham of the New York Giants yells on the mic. There were bottles on bottles. Migos, Imagine Dragons, and Machine Gun Kelly was there. New Orleans Saints running back Alvin Kamara took out Travic Kelce from the Kansas City Cheifs in a wild Madden tournament to win a giant trophy. The entire description makes you want to quit everything you’re doing right now and become a pro gamer.

“Thank you guys so much for following the stories tonight. We’re back in the room watching Arnold Schwarzenegger in The Eraser. Want to thank my beautiful wife Destiny, Odell Beckham, Jamie Foxx, everybody at EA Sports. In the game. Thank you to Game Informer. Been reading those magazines since the Nineties. Thanks for the amazing tour at your guy’s office and shout out to XBOX for giving the winner of the EA Sports Bowl showdown UFC 3 an XBOX ONE. Your boy Mighty got one and I already have one, so we’ll be giving this away on the Twitch channel. Thank you guys, ‘preciate you.” — Demetrious Johnson via his Instagram live story.