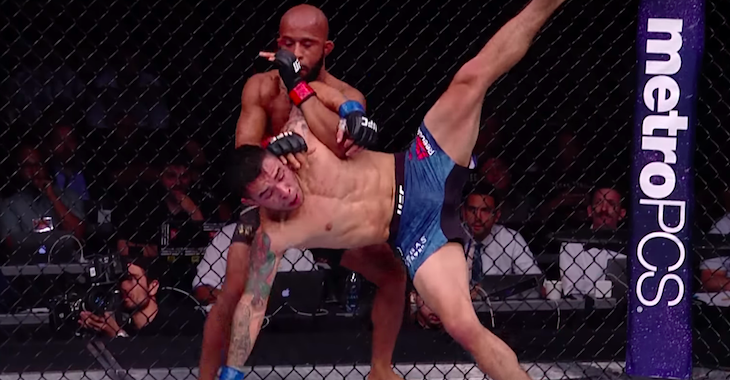 When examining the options for 2017’s Submission of the Year, there is one very clear frontrunner: the insane, flying armbar flyweight champ Demetrious Johnson locked up on Ray Borg back in October. It was the perfect display of just how breathtaking the grappling side of mixed martial arts can be.

Speaking on Monday’s edition of The MMA Hour, Johnson recounted the events that led to this insane submission win.

“That’s the beautiful thing about mixed martial arts, and I’ll tell people that, you have to think outside of the box,” he said (h/t Shaun Al-Shatti of MMAFighting.com). “And when I pulled out that submission, how I learned it was from [my coach] Matt Hume. Me and him were sparring, and he was having a hard time getting me in an armbar or rear-naked choke, so he mixed in a wrestling snap-down. Basically, a suplex to a wrestling snap-down.

“If anybody has wrestled before, when somebody doesn’t sit out, you snap them down and pin them,” the champ continued. “He basically did that, mixed it in and threw me between his legs and did an armbar. And I said, after he submitted me, I got up and I go, ‘God bless your soul. Teach me this.’ Then he taught it to me after that class, and I’ve been hitting that submission for years and years.”

“Each time I’m training and sparring, I’m always pushing myself to submit my training partners. And then the week before we went to fight Ray Borg — this turned out to be a 12-week camp — I was sparring and Matt was yelling, he goes, ‘Hit it! Hit it!’ And so I hit it, and Matt goes, ‘Dude, you’ve got to hit that [in the fight]. You’ve mastered it. You’ve been doing it for years.’ He goes, ‘That’s a $50,000 submission right there, DJ. That’s what that is.’ So when it came to the fight, I was like, ‘You know what, I’ve got energy left. Ray Borg is my size, he weighs the same as me. I got this.’ And I pop, threw him up and landed it, so I’m grateful.”

What did you think of Demetrious Johnson’s jaw-dropping submission of Ray Borg?