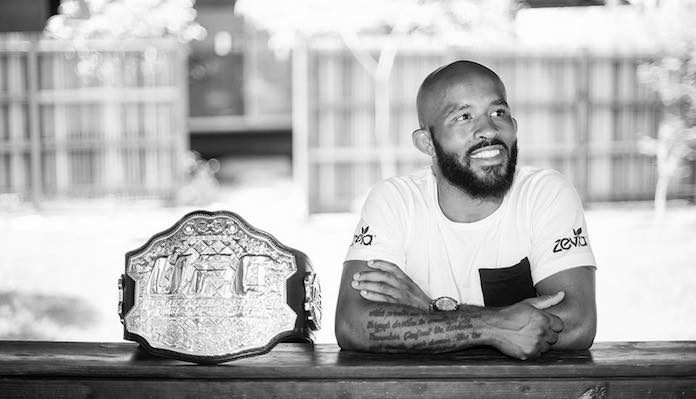 Last night, in the co-main event of UFC 227, one of MMA’s most legendary title reigns came to a shocking halt, as UFC flyweight champion Demetrious Johnson lost a razor-close decision to Olympic gold medalist Henry Cejudo.

While some former champions have a difficult time accepting defeat and returning to the contendership race, Johnson has been nothing but classy in the hours since he lost his title.

Daniel Cormier, who now owns the UFC light heavyweight and heavyweight titles, has taken notice of Demetrious Johnson’s attitude post-fight. On Sunday morning, the double-champ took to Twitter to heap praise on the former flyweight king.

I wake up this morning and first thought is wow how crazy was it to watch @MightyMouseUFC handle losing that fight. Every fighter can learn from that. DJ you are a champion in every sense of the word. Great fight, great champion. Ur the man DJ!

“I wake up this morning and first thought is wow how crazy was it to watch [Demetrious Johnson] handle losing that fight,” Cormier said in his Tweet. “Every fighter can learn from that. DJ you are a champion in every sense of the word. Great fight, great champion. Ur the man DJ!”

Johnson quickly responded to Cormier, explain why he’s been so chill in the wake of his title loss: because there’s nothing to do but accept it and move on.

“Thanks brotha, all you can do is accept it and move on with life,” he said.

While Demetrious Johnson has irrefutable claim to an immediate rematch with new champion Henry Cejudo, who he knocked out a little over two years ago, he says his first priority is healing the fairly serious injuries he sustained in the fight.

“It wasn’t like he blew me out of the water,” Johnson said at the UFC 227 post-fight press conference. “First thing’s first. I’m not going to be like, ‘Ah, I want a rematch.’ I need to get healthy first. My health is No. 1, and I’m not going to sign a contract if I can’t get through eight weeks of training camp.”

“It was a great streak, and it’s not over yet,” Johnson added.