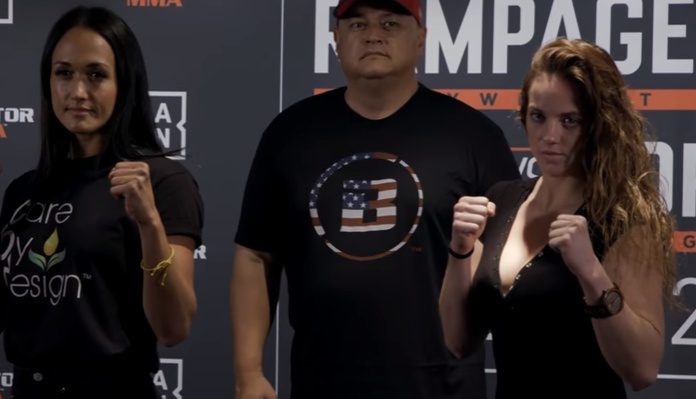 At Bellator 206 this Saturday night, the highly skilled counterpart to Gilbert Melendez, Keri Melendez welcomes newcomer Dakota Zimmerman to the ranks of the pros.

Although Melendez is only 2-0 in her professional MMA career, she has built up a solid reputation as a kickboxer thus earning her a deserved spotlight.

In Melendez’ third pro bout, she’ll be taking on the debuting Zimmerman who is getting a very big opportunity on one of the biggest cards of the year against a star in the making.

“I was pretty excited [to get this opportunity],” Zimmerman told BJPenn.com’s Drake Riggs at Bellator 206’s media day. “Actually, her last fight I watched the weigh-ins for it, I watched all of it and I couldn’t imagine fast-forwarding being offered to fight her, it’s pretty cool, pretty exciting. I have a lot of respect for her, for her standup and I’m honored. I’m really excited.”

For Zimmerman, her last bout as an amateur came in 2016 so she’ll have a gap between MMA fights. However, she did stay active as she competed in a Golden Gloves boxing match in the meantime.

When it comes to each fighter, Melendez is obviously the one with the more well-known name as she’s the wife of Gilbert and an established kickboxer. Despite this, Zimmerman is more than fine with being the underdog and is confident in her abilities.

“It makes me excited [to be the underdog]. I think that going into something where I know that the majority of the world is doubting me…it just made me train that much harder.

You can see in my other fights, my amateur fights, that I can take a hit but I wasn’t movin’ real well. We worked a lot on becoming lighter on my feet, being on my toes more. I’m confident everywhere [the fight goes].”

Constantly working on her game overall, Zimmerman believes that it will be her jiu-jitsu that she will utilize to its fullest to secure the victory on Saturday night.

Melendez vs Zimmerman was originally set to be the first bout on the main card but a featherweight clash between Gaston Bolanos and Ysidro Gutierrez has since been bumped up into that spot. Thus finalizing the main card as such: