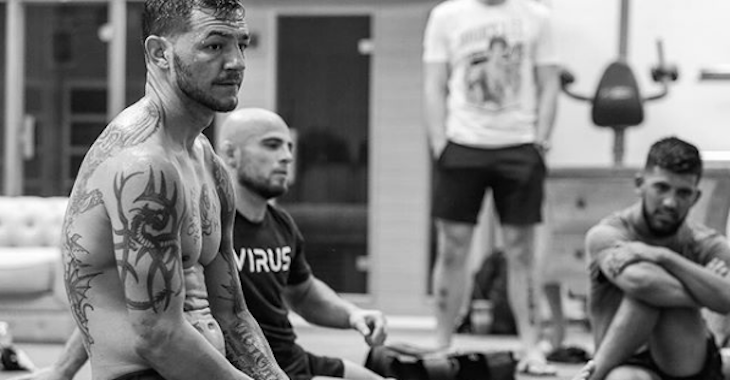 The UFC featherweight title lottery is finally over after Frankie Edgar was forced to bow out of the fight. Max Holloway will defend his belt at UFC 218 against the same man he took it away from at UFC 212: Jose Aldo. For awhile, it looked like Cub Swanson was the clear choice to step up to finally get his shot at the title, but things didn’t work out that way. Swanson will stay in his fight with Brian Ortega at UFC Fresno, which is the last fight on his contract. This begs the question, will Swanson explore free agency after the title shot snub? It sure sounds like it.

“[Not giving me the Max Holloway fight because I was going into free agency] was never going to be an issue because I knew and they know that the fight wouldn’t happen unless we made a deal, which I’m sure we could have made a deal. But that wasn’t even offered. I haven’t been offered a new deal since all this happened [with UFC 218]. Dana did say that he’d like try to work something out, sit down and talk after the fight [with Brian Ortega], no matter what happens he said he wants to keep me around, but we could have came to terms before and made this fight happen and they know that.”

With @FrankieEdgar out of the fight it needs to go to the most gangster MFr in the division @CubSwanson!

“[The UFC] made me a good offer comparatively to what a lot of guys make. I just explained to them that I’m getting on the later side of my career, I’ve never been doing better, I have a family now and if I’m going to start concentrating on  about retirement so I’m set up and not left with nothing at the end of the day, I should be getting paid more. I’m investing, I’m doing all the right things. I’m not blowing money, I’m not that guy. It’s like, man, if I had more money to work with I could really set myself up so that’s what I’m fighting for. I’m going to get paid the most if I fight for a title or hold a title. That’s when all the big opportunities come, but I haven’t had that opportunity. So, I wanted to fight out of my contract only to see what other companies are going to offer and be able to show the UFC, ‘Look, I’m worth this. C’mon, step up.’ I want to fight in the UFC. I love it but I also want to be taken care of and paid what I’m worth.” — Cub Swanson speaking on the latest episode of The MMA Hour.

While it’s hard to imagine a big name like Cub Swanson jump ship to Bellator, it has become more and more likely over the years. Rory MacDonald, Gegard Mousasi, Roy Nelson and Ryan Bader are some of the talent that Bellator was able to acquire from the UFC in recent years. If the UFC isn’t careful, Cub Swanson could get the title shot he’s been fighting for but with another organization. Either way, his fight with Ortega on December 9th for UFC Fight Night 123 is a must-watch.

“I’m looking back at all the people that have gotten title fights — Chad Mendes got multiple, Frankie Edgar has gotten multiple, Aldo multiple, Korean Zombie got one out of nowhere, Ricardo Lamas got one. All the people at the top have all gotten them. Max [Holloway] took forever to get one and I was very vocal about him deserving a title fight. I just don’t see why in 10 years with the company I couldn’t have gotten one. I feel like maybe they don’t think that highly of me.”