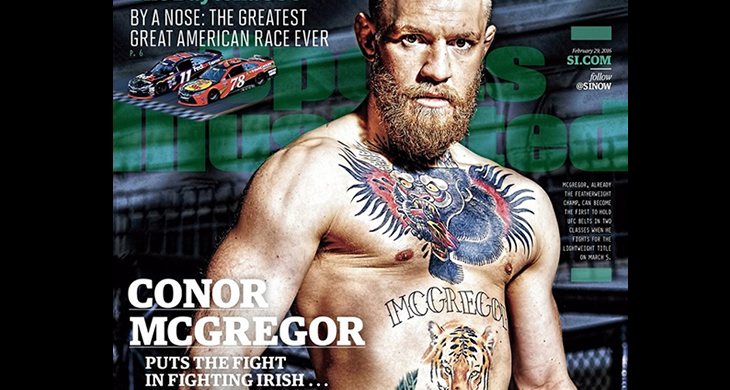 Fighting up a weight class or two seems impossible for most MMA fighters but not for Conor McGregor.  It’s not that he wasn’t training for a fight, he was, but it was supposed to be a 155 lbs. title fight instead of 145 lbs. where he is the champ. With the 155 lbs. champ pulling out with a broken foot the UFC had to scramble a little to find a replacement.  After several fighters said they would come to the rescue and fight Conor it was agreed the Nate Diaz would be the opponent but at 170 lbs.  A full two weight classes and 25 pounds above where he is the champ.

No matter what happens this Saturday night March 5th McGregor can still go back down to 145 lbs. and fight for the title he all ready holds. Even so this is a huge risk for arguably the biggest star in the UFC.

Hype and money is what Conor is all about. He wins Saturday he can most likely pick from his wish list.  He can have Title fight at either 155 lbs. as originally scheduled or at 170 lbs. He want to hold all 3 belts at the the same time which is possible but problematic if he wants to keep them.

A champ has to defend the belt at least once a year.  If he holds all three belts each title would be stuck for a year while he defends the others.  IF a fight falls thru or he get a minor injury he will lose his belt due to inactivity.

All of this could become a moot point if he loses to Diaz this weekend.  Well, at least for a little while.

Lose to Diaz and the Welterweight champion won’t fight him since he already Knocked out  Rory Macdonald who completely dominated Diaz.

Nate Diaz had two weeks to prep for this fight and was training for a triathlon until he got the call. Diaz wins McGregor suddenly becomes a non factor at both Lightweight  and Welterweight.

Conor has had a full camp, he says he’s walking around under the 170 pound limit and his hype machine is in full swing.

This Saturday will tell the full story but win or lose we all will be watching his next fight as well.