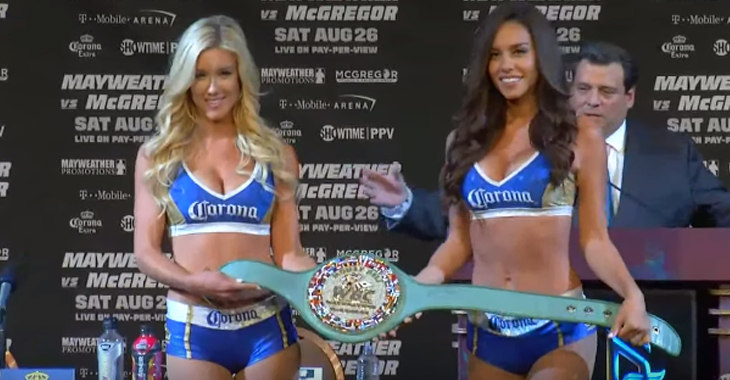 If you heard that Floyd Mayweather and Conor McGregor were fighting for the WBC “Money Belt” a month ago, you probably would have thought it was a joke. However, on Tuesday during the last press conference held for the mega-million dollar boxing match, WBC President Mauricio Sulaiman showcased the diamond and jewel encrusted belt to be given to the winner on Saturday night.

“The perfect title for this is a ‘money belt,’” Sulaiman told MMA Fighting. “We’re just proud to have a little bit of history for this event.”

Sulaiman said the alligator leather strapped belt features 1.5 kilograms of solid 24-karat gold, 600 sapphires, 300 emeralds, and 3,360 diamonds. Sulaiman did not give the exact amount the belt is worth. However, the belt for the 2015 bout between Mayweather and Manny Pacquiao was worth more than $1 million. That belt featured 3,1017 emeralds and just 0.8 kilograms of gold, which pale in comparison to what “The Money Belt” is flaunting.

“It cost a fortune,” Sulaiman said. “It cost many, many, many hours of work of many artisans. It is just a beautiful piece of work.

“It’s a lot of money. I don’t really have a figure. It’s a priceless piece for a historic event.”

Sulaiman added that Mayweather and the WBC have had a great relationship with Floyd’s 19-year championship status with the organization. The WBC President added that he believes this fight merits a “special reward” for the man who gets his hand raised.

“So whoever has negative comments about the event, of course they have the right to express their opinion and have their own opinion. But I feel it is a great event for boxing, because it will showcase and show millions of people the great art of self-defense, the great art of boxing, which has been developed throughout the years.”

Will Floyd Mayweather end up being the double money belt champ already having the one from his fight with Manny Pacquiao? Or will Conor McGregor add this prized trophy to his collection? Let’s discuss this in the comment section.