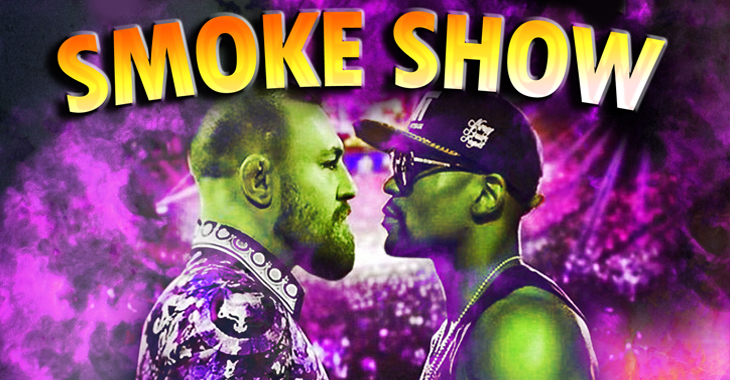 It’s 2017 and there are no rocket packs or super powered tubes that shoot us to work like in Futurama, but there sure is weed everywhere. There’s a pot show about everything you can think of: Court cases, a cooking show that only makes edibles, even a show where people get high and watch professional wrestling. That’s when it hit me in the head like a Nick Diaz nunchaku strike, where is the weed MMA show at? That’s why I decided to toke up, put on a headset and created the (Not So) Secret Smoke Show.

Oh sh-t, did I just speak in the first person? I sure did, reader. I’ll break the fourth wall too, because rules don’t really matter. We live in a world where Conor McGregor, a guy who has never boxed before in his life, can fight Floyd Mayweather and they’ll convince you it’s a proper athletic contest. Hell, even the Nevada State Athletic Commission threw out all of their long-standing traditions and rubric because f-ck it, this is the biggest fight ever in the history of all human existence. So big in fact, that I had to use the startling opening theme from 2001: A Space Odyssey in my latest episode in order to give it some gravitas, or balls, whichever you prefer.

Listen, marijuana makes everything better. That’s not like, just my opinion, man. It’s basically a scientific fact now, so don’t even try to argue it. Therefore, weed will definitely make the idea of Conor McGregor fighting Floyd Mayweather go down easier. It definitely makes acting like an idiot while I’m high off the stickiest of icky way easier to release on the internet. It’s of my opinion (and in no way representing the views of BJ Penn and/or BJPenn.com) that the whole world needs to get stoned. How do you think this circus event of a boxing match got put together anyway? Someone had to be as high as a martian’s genitals. Spoiler alert: On August 26th, I will be too.

You can listen to previous episodes of the (Not So) Secret Smoke Show right here.