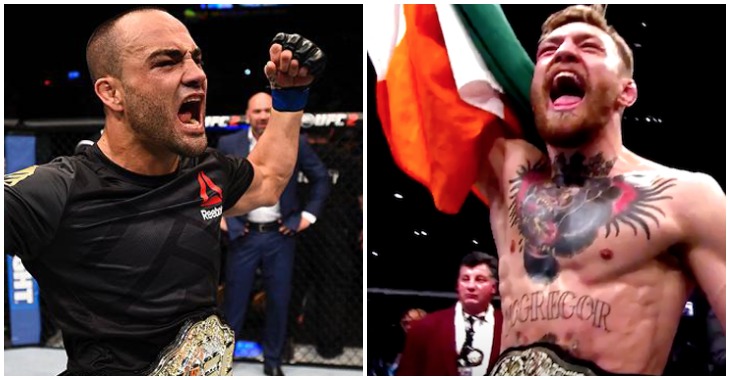 While Conor McGregor boasts an impressive 20-3 professional record that has seen him go 8-1 throughout the course of his three year stint with the UFC, he faces arguably the toughest test of his mixed martial arts career this Saturday when he steps into the Octagon against UFC lightweight champion Eddie Alvarez in the main event of UFC 205, the UFC’s historic event at the Madison Square Garden. Ahead of the fight, Mystic Mac has predicted that his unpredictable striking style coupled with his improved grappling game will be too tough of a puzzle for the lightweight champ to figure out, resulting in a first round KO for the featherweight champ. On the other hand, Alvarez has predicted that he believes McGregor will gas in the second round, and then be submitted, much like his first fight with Nate Diaz, ending McGregor’s hopes of becoming the first simultaneous two-division UFC champion, and sending the Irishman back down to featherweight.

During a recent interview with TMZ, Alvarez spoke about the fight, boldly declaring:

“Lot of energy man, lot of energy. Everybody’s coming out to support, I’m excited. We are in the Madison Square Garden, and we are going to break every damn record known to man, and I’m going to beat this dude down in front of everyone. We’re going to silence the country of Ireland. About to be silent, all of them.”

Alvarez was then asked if there was anything positive about Conor McGregor, which prompted the lightweight champ to shift gears as he began to briefly speak positively about his opponent:

Who do you have winning the fight and leaving The Empire State with the lightweight championship? Sound off below PENN Nation!