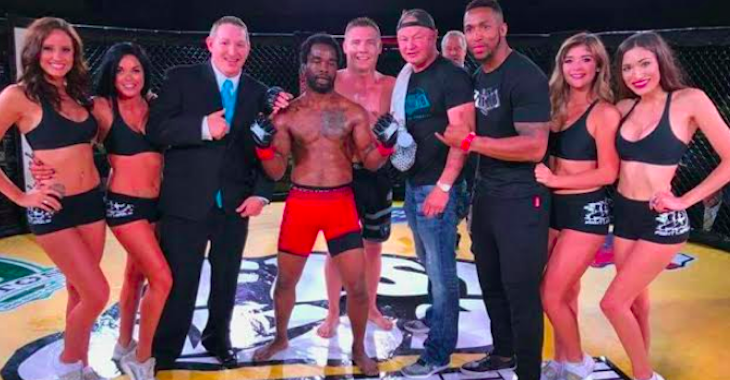 Since parting ways with the UFC in 2016, Texan lightweight veteran Cody Pfister has been busy. In addition to a victorious debut in the Bellator cage, he’s also kickstarted his own MMA promotion in the cleverly named “Fist Fight League.”

In late September, Fist Fight League hosted its second show, and it was a fun one. Pfister himself headlined the show, taking on the fan favorite “Felony” Charles Bennett. The fighter-turned-promoter won this fight fight via submission in the first round. Fist Fight Night 2 also featured appearances by Wesley “Cabbage” Correira, Paul Buentello, and our very own BJ Penn.

“I knew my pressure would be the key to success in this fight so I pressured for an early takedown and got the sub,” Pfister told BJPenn.com of his headlining bout with Bennett. “Charles Bennett is one of the best guys I know. He helped me take down the event after the fight until 7:00 the next morning. I have nothing but respect for that man, and I look forward to having him on other shows in the future.” With this successful sophomore show in the books, Pfister is looking forward to a busy 2018. The plan is to jumpstart the new year with another exciting show in Amarillo, Texas on January 13th. By the time the year is over, he’s hoping his upstart promotion will have hosted at least six shows – a few of which are likely to occur in other cities.

In the wake of Fist Fight Night 2, Pfister is grateful for everyone who chipped in and helped him make the event a reality.

“I would first off like to thank all my fighters for coming out and putting on an amazing show,” he said. “I would also like to thank BJ, Cabbage and Paul Buentello for coming to this event.

“I would like to say thank you to all of our sponsors Mulligans Sports Pub, Ryan O’Neal Autos, Bud Light, Trailer Sales, Jorge’s Mexican Restaurant, and LoneStar Services. We would also like to thank BJ Penn for making this event possible! I can not tell my fighters how proud I am of them and I can not wait to put on another event so these guys as well as myself can continue to live out our dreams.”