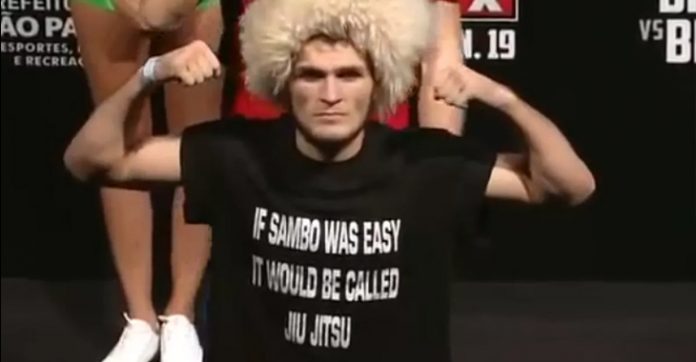 Every week and every day is just a countdown to UFC 223 where we hope we finally get to see Khabib Nurmagomedov fighting Tony Ferguson for, some sort of UFC title. We all know it does to the ground. Ferguson is confident that he’ll be able to hold his own there and slice open Nurmagomedov on the bottom, while the Russian smashing machine knows it is Khabib Time. Meanwhile, Chael Sonnen is out here denouncing Sambo, but still praising Nurmagomedov.

“Sambo sucks, Sambo has always sucked and I don’t believe Khabib [Nurmagomedov] is a Sambo player. I think somewhere he just wanted to pay respect to Sambo. Being Dagestani, I believe he got the skills he got in a wrestling room. He clings to that Sambo. In the history of them setting up that [UFC] cage, there has never been a contender – let alone a stand-out – that was good at Sambo. It sucks. It’s not real. It’s a fake sport.”

A cobra in the grass meets a bull in the china shop. @TonyFergusonXT vs @TeamKhabib. #UFC223 pic.twitter.com/JieXIVumfS

“Sambo is the martial art of the Russian military. The Russians have a very good military so it adds credibility to Sambo. Nobody has stopped to think well, those sons a bitches have guns and tanks too. They’re not really out there doing this Sambo. […] Fedor [Emelianenko] was one of them [to pay respects to Sambo], Oleg Taktarov. You can search. You got to go back to 1993 to pull out less than a handful of names. […] Sambo sucks, but Khabib doesn’t. He just pretends he does Sambo. That’s a wrestler right there.” — Chael Sonnen speaking on his Beyond the Fight.

Chael Sonnen better hope Khabib doesn’t catch wind of this. He’s got a whole line of t-shirts and a pile of bodies that says otherwise. Not to mention his World Combat Sambo gold medals. Either way, we’ll get to see Sambo up against 10th Planet Jiu Jitsu come April 7th and the world – and Chael Sonnen – will be watching.