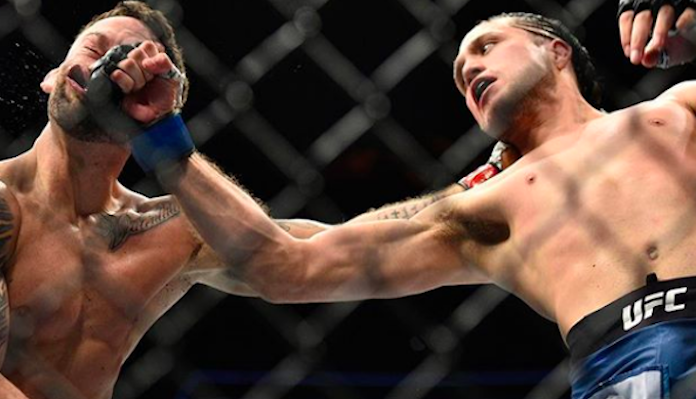 When Tony Ferguson was forced out of his UFC 223 lightweight title fight with Khabib Nurmagomedov, top UFC featherweight contender Brian Ortega was briefly considered as a replacement opponent for the Russian star.

Though the opportunity to fight Nurmagomedov instead went to UFC featherweight champ Max Holloway — and ultimately Al Iaquinta — Ortega is still intrigued by the potential matchup. He believes that his world-class jiu-jitsu skill make him a very dangerous test for the undefeated Russian grappler.

“Not too many people present a good ground game from the bottom,” Ortega said of a potential matchup at a recent media scrum (via MMAJunkie). “They survive a little bit, and it’s kind of boring. But not too many people are attacking from the bottom, hurting with elbows. They don’t bring that kind of game because it takes a long time to develop. Whereas me, I grew up in that situation, where I was always the bottom guy, always getting beat up by these guys. So I had to adapt my game to that.”

“I was curious as to what was going to happen,” Ortega said.

At present, Brian Ortega is set to battle Max Holloway for featherweight gold at UFC 226. Should he topple this massive challenge, he’s interested in fighting Nurmagomedov next.

“It’s on my radar,” he said. “I have a big fight right now, but that one, for sure, it’s on the radar. I have to be successful on July 7, and hopefully, I can make that happen after.”

Ortega has previously expressed interest in moving up to lightweight in the future, should the right opportunity present itself. For him, Nurmagomedov seems to be that kind of opportunity.

“I’ve definitely thought about it,” Ortega said on an episode of UFC Unfiltered. “My goal is if I’m successful against Max Holloway, then I’m looking at some opportunities and things in the 155-pound division. We need the perfect match up, not just a regular match. I really want to give [the fans] a war, something crazy, something big.”

Who do you think wins a fight between Brian Ortega and Khabib Nurmagomedov?