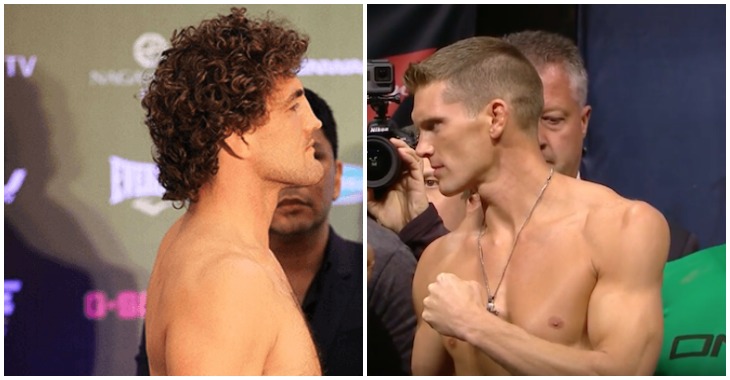 While a case can certainly be made for Douglas Lima, Rory MacDonald and Jon Fitch, it’s very possible that One Championship welterweight king Ben Askren is the best welterweight outside the UFC. Despite his status as such, however, the former Bellator champ has yet to reach a deal with the UFC, and so its impossible to say how he’d fare against the promotion’s best welterweights.

That, however, hasn’t stopped him from talking about these potential fights. On a recent episode of Chael Sonnen’s You’re Welcome podcast, Askren offered his thoughts on how fights with the UFC’s two best welterweights would go.

First, Askren reluctantly gave his assessment of a potential fight with his long-time friend and training partner Tyron Woodley, who is the UFC welterweight champ.

“I’ll give you my simple answer,” Askren said, after assuring the fight would probably never happen. “I think it goes one of two ways quickly and I think it should be pretty obvious to anyone that knows mixed martial arts. Tyron is – and they did a statistic on this – he’s the hardest hitter in the division. Meaning, when his punches land, people go down. So, think he hits me and he connects early and I go down, or otherwise, I’m able to withstand that initial barrage and I’m able to impose my will after that. I would say if there’s a 170-pounder in the world that’s the toughest fight for me, he’s it. His punching power, and then obviously with the wrestling background he has, makes that a very tough fight for me.”

From there, Askren weighed in on a potential showdown with Stephen “Wonderboy” Thompson, who recently fought Woodley to a draw, and will rematch him in the main event of UFC 209 on March 4.

“These other guys suck,” Askren said of the rest of the UFC welterweight division. “Stephen Thompson, I’d do whatever I wanted to him. He’d be my girlfriend if I wanted him to be.”

How do you think Ben Askren would fair against against the UFC’s best welterweights? Sound off, PENN Nation!