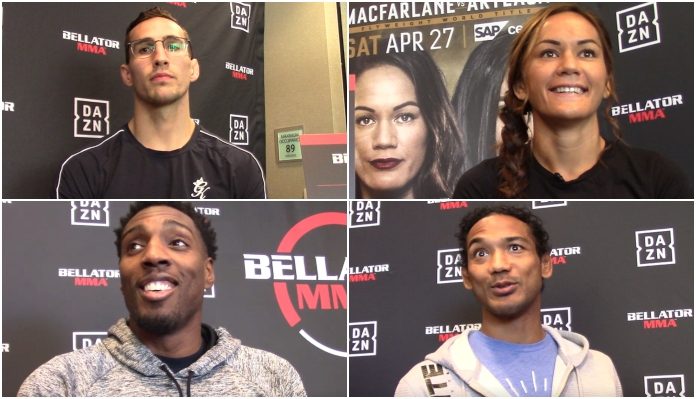 The end of 2018 marked a new era of sorts when it comes to cross-promotion in MMA as Bellator and RIZIN teamed up like never before.

For RIZIN’s annual big New Year’s Eve show, in 2018 that was RIZIN 14, one of their biggest stars, Kyoji Horiguchi would fight for the inaugural bantamweight title. His opponent would be none other than Bellator’s bantamweight champion, Darrion Caldwell.

Keeping that trend going, just this past weekend at RIZIN 15, Bellator’s Muhammad ‘King Mo’ Lawal would return to the RIZIN ring to this time vying for the inaugural light heavyweight crown opposite former opponent, Jiri Prochazka.

With Bellator 220 taking place tomorrow night, BJPenn.com was on the scene for media day where we caught up with the main card fighters to see what they thought about the new RIZIN partnership and if they would be interested in participating in crossover fights themselves.

Lightweight, Adam ‘The Bomb’ Piccolotti (11-2, faces Benson Henderson at Bellator 220): “Always open for any opportunities that are out there, you know? I love to travel especially, so being overseas would be really cool. I’ve never been to Asia. I’m always open to the opportunity.”

Welterweight champion, ‘The Red King’ Rory MacDonald (20-5, faces Jon Fitch at Bellator 220): “Yeah, if the opportunity presents itself, I’d like to see the options, maybe. Yeah.”

Light heavyweight, Phil ‘Mr. Wonderful’ Davis (19-5, faces Liam McGeary
at Bellator 220): “Absolutely, I’d be interested in that. They’ve got some good talent out there. It didn’t work out for King Mo. So [Jiri Prochazka] is obviously a tough guy. King Mo’s a tough guy so whoever [can beat him]… I mean, Mo’s a tough cat. And I think it was TKO in the third round? i’d be willing to mix it up with that guy. He’s got my respect already just for beating a guy like Mo. I knew he’s quality so yeah, I’d be willing to do that.”

Flyweight title challenger, Veta Arteaga (5-2, faces Ilima-Lei Macfarlane
at Bellator 220): “Yeah, if the opportunities are there… That’s how I see every fight. It just comes with a lot of opportunities. The last fight came with an opportunity that led me to this position and this fight’s going to lead to more. So I just see them as nothing but opportunities. So if I have the opportunity, for sure I would take it.”

Flyweight champion, ‘The Ilimanator’ Ilima-Lei Macfarlane (9-0, faces Veta Arteaga
at Bellator 220): “That would be dope. That would be totally dope. I actually went to go watch one of the New Year’s Eve shows for RIZIN… Yeah I mean, I saw the production and I was like this is bad ass, and then I saw actually King Mo was fighting on that card as well, so I saw [Bellator matchmaker Mike] Kogan and a bunch of Bellator people. So yeah, I would love to do that. That’s definitely a bucket list kind of thing to fight in Japan.”

Bellator 220 goes down tomorrow night live from San Jose, California. It can be watched exclusively through the DAZN streaming service. As for RIZIN, all their events are watchable through FITE.tv.

Also, be sure to check out all the fighter interviews in their entirety on BJPenn.com’s YouTube channel.