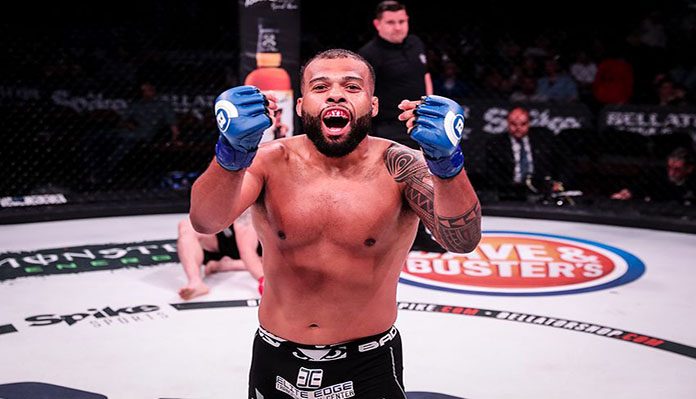 Jordan Young is an undefeated Bellator light heavyweight fighter that with a win next weekend will start his career 10-0.

Unlike boxing, few fighters start their professional careers 10-0 in MMA. Even fewer fighters do so at just 24 years old. Such is the case for American Top Team’s Young who finds himself in that exact position next weekend in Thackerville, Oklahoma.

“When I first signed with Bellator I felt like Tony Montana,” Young joked. “Even Tony Montana started as the help, he started from the bottom. Now I worked my way up, I’m not on the main card yet but its coming. Its a matter of when not if.”

First thing first for Young who fights Anthony Ruiz at Bellator 210. Ruiz has nearly 60 pro fights in his MMA career. However, Young plans on taking more than just a win home on November 30.

“I plan on taking this man’s soul in Thackerville,” said Jordan Young. “And when I do, I’ll take all of his experience from those fights home with me too.”

A win for Young at next weekend’s Bellator 210 from Thackerville, Oklahoma would strengthen his case for a high-level opponent going forward. Make no mistake about it, Jordan Young has a solid grasp on the landscape of the light heavyweight division.

“I’d be concerned with the state of the division if I was in [Vadim] Nemkov’s position,” said Young. “I feel I’m a couple steps behind that. But Nemkov just beat Phil Davis so he is up there, Ryan Bader I think has a good chance at beating Fedor Emelianenko in the Grand Prix. [Muhammad] King Mo [Lawal] and Liam McGeary are fighting right after me, so I think the division is in a good place.”

Indeed the 205 division looks to be alive and kicking for the Viacom owned promotion. The division, however, is still a relatively new one for Young who recently moved up from middleweight.

“I’ve only had one fight at light heavyweight,” Jordan said. “I felt good in the cage last fight but it was a learning experience. Overall it was a good experience but now I feel like I can start to really fine tune everything for this camp.

I’ve made vast improvements with my body at light heavyweight. I fell much more comfortable and I’ve gained functional strength and size.”

Jordan Young will take on Anthony Ruiz in a feature light heavyweight bout on the Bellator 210 prelims.