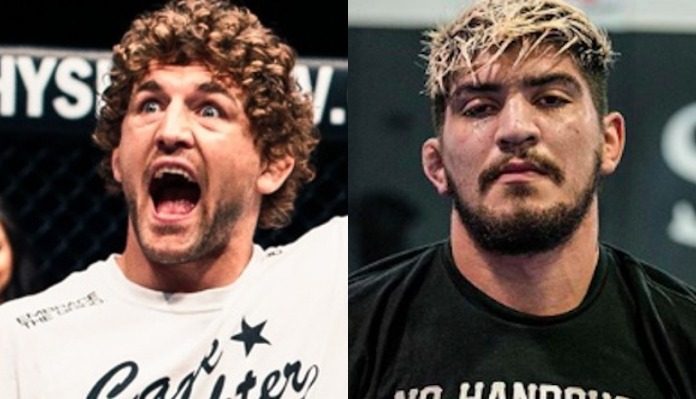 At one point during the days festivities, Dillon Danis swiped MacDonald and Caldwell’s Bellator titles and posed for a photo with both straps slung over his shoulders.

While this stunt is definitely generated plenty of attention, it did not go over well with UFC welterweight contender Ben Askren, who previously held the Bellator welterweight title.

Askren promptly took a shot at Dillon Danis on Twitter, scolding the BJJ specialist for his antics.

Some of us actually win belts. Some of us just like to play pretend. https://t.co/j63EipVbAX

Unlike his training partner Conor McGregor, who previously held the UFC lightweight and featherweight titles simultaneously, Dillon Danis has yet to win a major title in MMA.

After an impressive BJJ career, Danis recently dedicated his focus to MMA. He won his professional debut in 2018, defeating Kyle Walker by submission, and will take on Max Humphrey at Bellator 222.

Rory MacDonald, the owner of one of the belts Dillon Danis swiped, is set to defend his title against Neiman Gracie in the second round of the Bellator Welterweight Grand Prix. Darrion Caldwell, the owner of the other belt Danis got his hands on, will defend his bantamweight title against Japanese star Kyoji Horiguchi. Horiguchi, who is the RIZIN bantamweight champion, recently defeated Caldwell by submission in the RIZIN ring.

Ben Askren, never one to let Dillon Danis off the hook, is set to return at UFC 239 this July, where he’ll battle Jorge Masvidal in what could well be a welterweight number one contender fight.