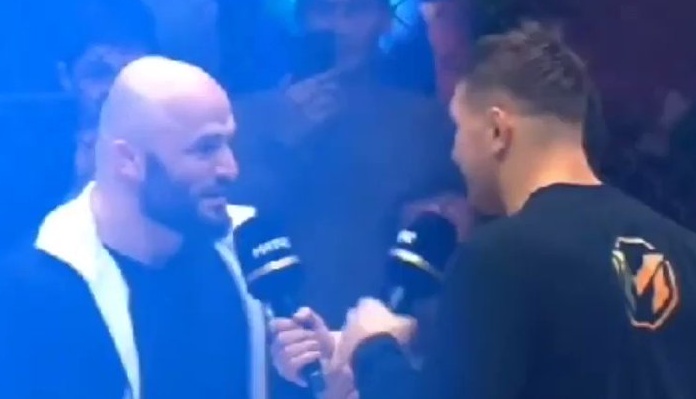 AMC held it’s final show of the year ‘Winter Cup’ on Thursday evening in Moscow. During the event, a faceoff between Ismailov and Mineev turned violent with both men throwing strikes at one another. Those actions spawned a sea of bodies to enter the cage and suddenly a wild brawl was underway.

Check out the highlights below courtesy of @Grabaka_Hitman on Twitter:

Well they're certainly in the Christmas spirit over at AMC Fight Nights in Russia pic.twitter.com/gCWagXAFRs

Apparently Magomed Ismailov and Vladimir Mineev had previously fought to a draw at AMC Fight Nights Global 90 in 2018. Thus, tensions were high when the pair faced off again this evening.

This is not the first time an insane brawl has occurred inside the cage at a mixed martial arts event. The most recent of which took place at UFC 229 in October of 2018, immediately following Khabib Nurmagomedov’s submission victory over Conor McGregor.

Another notable brawl that fight fans will remember well took place under the Strikeforce banner in April of 2010 when Nick Diaz, Jake Shields and crew went after Jason Miller.

What do you think of the insane brawl that took place during today’s AMC Fight Nights Global: Winter Cup event in Moscow? Share your thoughts in the comments section PENN Nation!