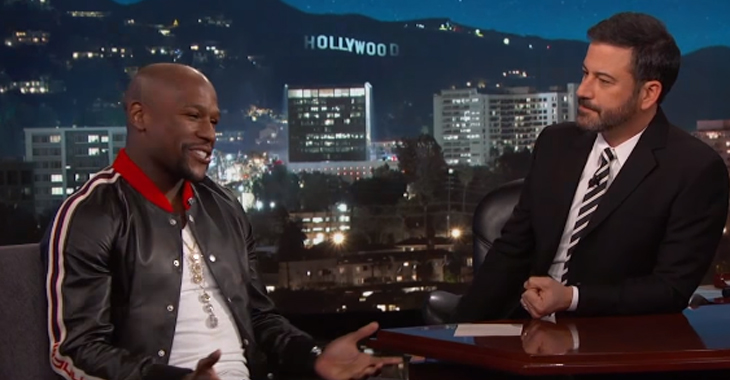 As the spectacle of Conor McGregor boxing Floyd Mayweather draws near, the media parade heats up. Mayweather is fresh from his appearance on Jimmy Kimmel Live to talk about the fight and said some interesting things. Despite talks of the fight not selling as well as people thought, Mayweather says it’s on track to beat the numbers his fight with Manny Pacquiao generated. As far as McGregor, Mayweather is so confident he will win that he guaranteed Kimmel he would pay back his bet if he lost. It will be interesting to see where the lines shift with the announcement of their fight’s glove change.

“Conor McGregor is undefeated standing up. When he stands up and fights toe-to-toe, he’s undefeated like myself. He’s lost three times but the only time he’s lost was when he was on the ground in the Octagon. […] As of right now, we got to get past August 26th. Once we get past August 26th, then we can talk about other things.” — Floyd Mayweather on a rematch with Conor McGregor in MMA. It looks like Floyd Mayweather is still teasing an MMA rematch with Conor McGregor. There’s so much money in this that with a tin foil hat, it wouldn’t be too much of a stretch to fix their first encounter to set up a second or even a third fight. …But in the Octagon? It seems highly unlikely, but then again we spent months and months saying the same thing about them boxing each other. Either way, with Mayweather making the rounds this week, you can take it to the bank that Conor McGregor will be on your favorite late night talk shows in a ‘f-ck you’ suit.