One of Italy’s top female mixed martial artists is set to compete for Ansgar Fighting League gold as Micol di Segni will lock horns with Elizabeth Rodrigues on March 14 in Spain.

Di Segni (7-3 MMA 0-0 AFL), a Dana White Contender Series alum and a Brave Combat Federation and Cage Warriors veteran, will battle for the belt in the co-main event of AFL Valkyries, a women-only mixed martial arts event hosted by the Spain-based promotion.

Not only she is one of the most successful women in Italian MMA, but she is also a model for the Suicide Girls website.

The Rome-native squares off against Portugal-based Venezuelan Elizabeth Rodrigues (4-2 MMA, 1-0 AFL) for the vacant AFL strawweight title in two months, after she failed to get a UFC contract by falling short against Mallory Martin, who happens to be now fighting under the Ultimate Fighting Championship banner. 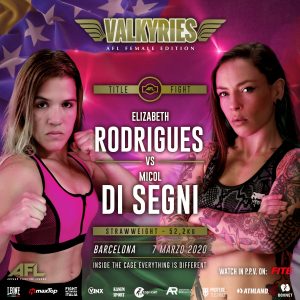 After several years of training spent in her home country, Micol di Segni decided to do her camps under the guidance of Greg Jackson and Mike Winkeljohn at the well-know JacksonWink MMA gym in Albuquerque, New Mexico.

Her opponent is also a veteran of Europe’s mixed martial arts scene having fought in many different countries and promotions all over the continent. Rodrigues will enter the AFL cage boasting a three-bout winning streak.

AFL Valkyries takes place on March 14 in Barcelona, Spain and it’ll be an all-female MMA show with a number of titles on the line. The event will be headlined by Brazil’s own Emily Mota and by the Spanish fighter Vanesa Rico, a veteran of Combate America, for the vacant atomweight title.