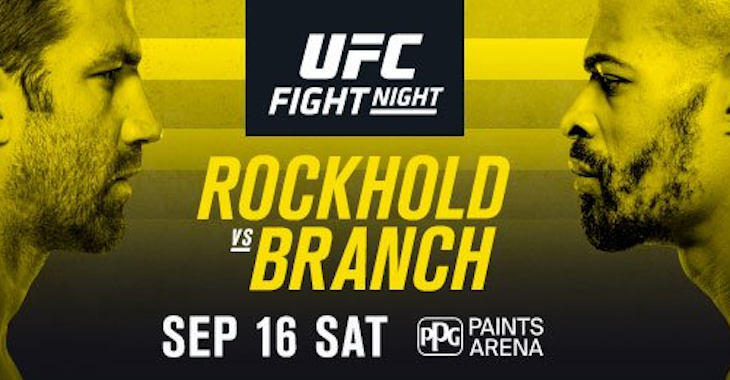 This Saturday night, on the very same night that Canelo Alvarez and Gennady Golovkin duke it out in the boxing ring, the UFC will return to Pittsburgh, Pennsylvania with UFC Fight Night 116.

The card will be headlined by a middleweight scrap between two decorated talents. In one corner, we’ll have former UFC and Strikeforce middleweight king Luke Rockhold, who will be stepping into the cage for the first time since he lost the title to Michael Bisping in June of 2016. In the other corner, we’ll have former two-division World Series of Fighting champ David Branch, who will look to build on the momentum of a defeat of Krzysztof Jotko in his recent UFC debut.

The co-main event of UFC Fight Night 116 will occur at welterweight, where rising knockout artist “Platinum” Mike Perry will collide with former title challenger Thiago Alves. Other highlights of the card include a middleweight scrap between Hector Lombard and Anthony Smith, a welterweight battle between Sergio Moraes and Kamaru Usman, and a middleweight showdown between Uriah Hall between Krzysztof Jotko.

Here’s a full rundown of the card, and start times for each portion of the broadcast.

Which feature of the UFC Fight Night 116 lineup are you most excited for?