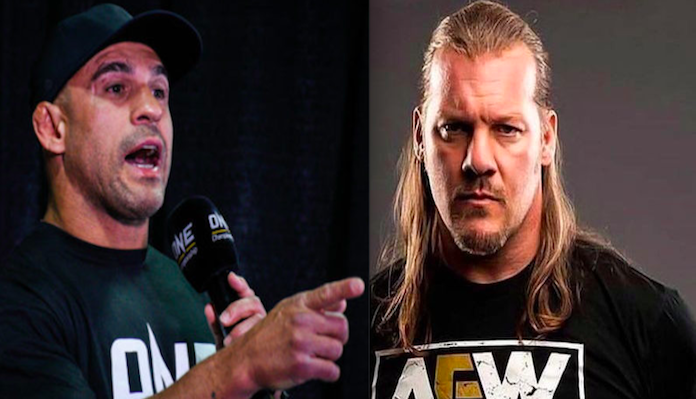 ONE championship superstar Vitor Belfort called out AEW wrestler Chris Jericho for a cross-promotional match, and Jericho has now responded.

Belfort, a former UFC champion, signed with ONE Championship a few years ago but he has yet to make his debut with the organization. He’s hoping to do so in the coming months, especially now that ONE Championship has a network television deal with TNT. The promotion kicks off the partnership on April 7, when Demetrious Johnson and Eddie Alvarez lead the pack on the network. Along with ONE, TNT is also the home to AEW wrestling, and Belfort believes that creates cross-promotion opportunities.

Speaking to the South China Morning Post, Belfort raved about the endless possibilities with ONE’s new deal with TNT. Among the opportunities for the veteran Brazilian fighter are cross-promotional matches with wrestlers. That’s why Belfort isn’t wasting time calling out the wrestling legend Jericho for a cross-promotion bout.

“With myself being with ONE, and on the same network, I think it’s time for (AEW CEO) Tony Khan to give me Jericho, and I can whip Jericho’s butt. We can really make that fight happen,” Belfort said. “I think this is what the audience wants, we can draw a lot of audience for AEW and ONE. It’s time to cross-promote and bring these two together. ONE has a lot of top athletes, including myself, and we can make some big fights in both.”

Belfort said that he hopes to do two matches with Jericho. The first would see Jericho venture over to the ONE cage and fight Belfort in MMA, and then the second match would see Belfort make his professional wrestling debut against Jericho in AEW.

“It’s gonna be phenomenal. Think about me and Chris Jericho doing a ONE fight and going over there, imagine how many fans wanna see that – him making his debut in ONE, and me making my debut in AEW,” Belfort said.

Jericho saw the callout and this is what his tongue-in-cheek response to it was.

Do you want to see a cross-promotional match between Chris Jericho and Vitor Belfort?