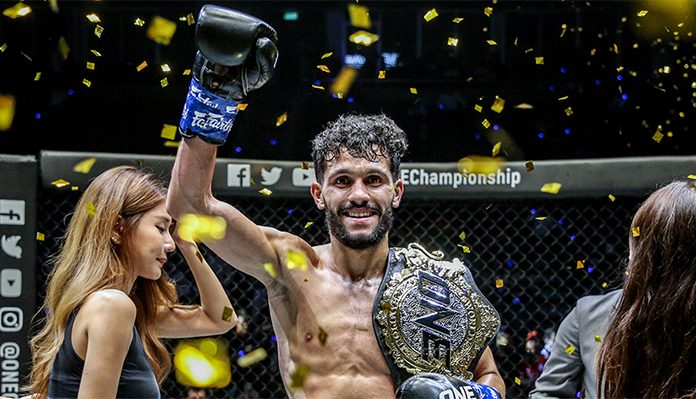 ONE: Age of Dragons will mark the return and debut of several major competitors on the ONE Championship roster. The card takes place at the Cadillac Arena in Beijing, and if the bouts live up to their billing, it could be a riveting night of action.

Beijing has long been a hotbed for martial arts culture. The region has become a significant focus on the mixed martial arts world with champions emerging across the globe whose origins are China.

With champs like Xiong Jing Nan and Weili Zhang following in the footsteps of Li Jianglang and others, we’re seeing the next generation of stars emerge from China.

Events like ONE: Age of Dragons should serve to keep the fire burning for other Chinese hopefuls considering a career in combat sports.

The Age of Dragons card has a good number of mixed martial arts, kickboxing, and Muay Thai bouts. Here is a look at the world-title contest and major returns on tap.

After his stunning upset victory over Petchdam Petchyindee Academy in August in Bangkok at ONE: Dreams of Gold the 23-year-old Ilias Ennahachi is ready to make the first defense of his title. The assignment will not be an easy one. Ennahachi is traveling into enemy territory as he takes on Chinese kickboxer Wang Wenfeng.

Wang has been capturing world championships in Muay Thai and kickboxing since 2012. As recently as June, he was recognized as a Top-5 kickboxer in his weight class. Wang is quite the warrior on the merits of his skills and training, but battling him in Beijing should present its own set of issues for Ennahachi. The crowd will almost certainly be out in force to cheer Wang on as he looks to become the second Chinese world champion in ONE.

Ennahachi is looking to prove his win over Petchdam was no fluke. At his age, Ennahachi is positioned to have a long reign as champion if he can lock in a few defenses.

Before Ennahachi locks horns with Wang, the first-ever ONE Light Heavyweight Kickboxing World Champion will be crowned in what could be an explosive co-main event. Morocco’s Tarik “The Tank” Khbabez will clash with Ukraine’s Roman Kryklia. Khbabez is a two-time SUPERKOMBAT Heavyweight champion who is coming down in weight to compete for the light heavyweight title. Khbabez is aggressive, explosive, and a dangerous striker. He’s undefeated in ONE, and he’s proven to be a fantastic finisher.

Kryklia is on an eight-bout winning streak and a former Kunlun Fight World Champion. He’s not known for the same power as his opponent, but he’s a little more experienced. Stylistically, this could be an exciting battle. In the end, a new champion will be crowned.

The Return of Yodsanklai IWE Fairtex

When he arrived with ONE Championship, Yodsanklai IWE Fairtex was expected to contend for and win world titles. It didn’t work out exactly as he planned during the ONE Featherweight Kickboxing World Grand Prix.

Yodsanklai was upset by Samy Sana who went on to lose to Giorgio Petrosyan in the final. Many expected that to be Yodsanklai in the final against Petrosyan, but if that matchup is ever to happen, the road runs through Ukraine’s Sasha Moisa. He too was a part of the Grand Prix, but he fell short of the final as well.

The winner of this match will have positioned themselves for a shot at Petrosyan soon.

The Debut of Jorina Baars

There are two highly-anticipated debuts on the ONE: Age of Dragons schedule.

The first will see kickboxer Jorina Baars in her first action with ONE. She’ll battle DKKO German Champion Christian Breuer.

The 30-year-old Baars is one of the most highly regarded kickboxers in the world. She is a former ISKA Welterweight World Champion, National Dutch Muay Thai Champion, Amazon K-1 Muay Thai champion, and the first-ever Lion Fight Muay Thai Women’s Welterweight Champion.

She’s undefeated at 46-0-3 with 16 KOs. That includes a win over Cristiane “Cyborg” Justino. Needless to say, big things are expected from Baars during her ONE Championship career.

The Debut of Ritu Phogat

As high profile as Baars’ promotional debut will be, the first look at Ritu Phogat might draw even more eyes.

Phogat is a member of a legendary family from India with an iconic patriarch in Mahavir Singh Phogat. The 23-year-old former Commonwealth Wrestling Gold Medalist has compiled a resume that has made her one of the most sought-after prospects in mixed martial arts. She is making the transition to a new sport.

It’s early in Phogat’s career, but if things go as planned, this first match could be the beginning of a memorable run.