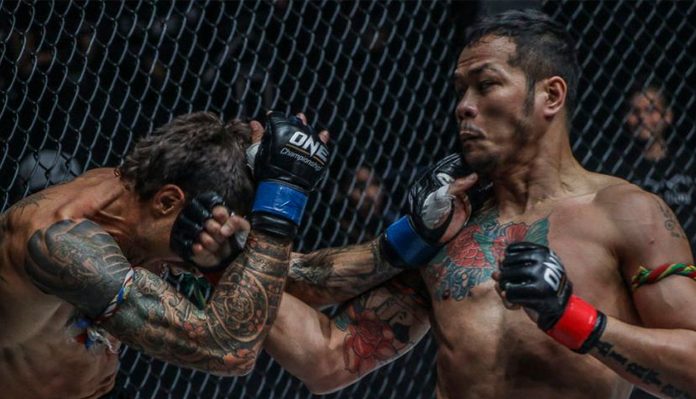 There are many reasons to be excited for ONE: A NEW ERA on 31 March in Japan.

While many eyes are on the four World Title bouts, and the high-profile debuts of former UFC champions Demetrious Johnson and Eddie Alvarez, martial arts fans should not overlook the interesting kickboxing match against Andy Souwer and Yodsanklai IWE Fairtex.

It’s a battle between two of the more decorated and accomplished kickboxers in the sport’s history, and a rematch 11 years in the making. Both have competed in ONE Championship on multiple occasions, but Souwer and Yodsanklai represent the stiffest competition the other has faced in the promotion.

Before the contesting of World Titles and ahead of the wave of American newcomers climbing into the ONE cage in Japan, Souwer and Yodsanklai will exhibit striking in the highest order.

Here is a breakdown of the matchup.

Souwer and Yodsanklai initially met back in 2008 at SLAMM Nederland vs. Thailand IV. The bout was competitive with Yodsanklai seemingly controlling the first two rounds, but his pace slowed, and Souwer had more energy in the final two frames.

By the end of the bout, Souwer was walking Yodsanklai down, and his leg kicks had done a number on the Thai legend’s base.

It could have gone either way, but the judges saw it in favor of Souwer.

This match took place 11 years ago, so it may not tell us much about what we’re going to see in Japan, but it’s worth it to watch if you haven’t seen the four-round battle. You can see the match in its entirety below:

At 36, Souwer is three years older than Yodsanklai, but oddly enough the latter has a significant advantage when it comes to kickboxing experience.

Yodsanklai has had 276 recorded professional kickboxing matches. Souwer has had 182. If the number is in triple digits, it’s safe to say expertise shouldn’t be a factor for anyone, but it’s still a noteworthy discrepancy.

Part of the reason Yodsanklai has had so many more kickboxing bouts than Souwer is that he hasn’t branched off into mixed martial arts. Souwer has had five professional mixed martial arts bouts and even a pro boxing match.

Don’t expect this diversity of combat sports experience to impact the result. When it boils down to it, both Yodsanklai and Souwer are hardcore kickboxers.

Few kickboxers are more precise and technical with their strikes than Yodsanklai. That skill is part of the reason he’s earned the moniker “The Boxing Computer.” His poise and balance are outstanding, but he can become a little too predictable with his strike locations.

In the first bout with Souwer, Yodsanklai never changed levels with his left leg kick. It remained targeted for Souwer’s midsection. Early on, it appeared to impact the Dutch warrior, but ultimately he was able to catch and shoot counter shots while parrying the body kick.

Souwer’s striking isn’t lacking in precision, and there is a touch more speed in his delivery. It’s a different packaging, but both men have the requisite qualities to break down an opponent.

The edge in this area would seemingly be in Yodsanklai’s favor by a landslide. Physically, he has a powerful frame. His calves are like tree trunks, and his shoulders and back are broader than Souwer.

Because of this, Souwer’s finishes are usually the product of cumulative punishment whereas Yodsanklai can stop an opponent with a single strike. We saw evidence of this in his last match against Luis Regis when Yod pummeled his opponent with three right uppercuts that signalled the beginning of the end.

Souwer hasn’t won via stoppage and strikes in more than four years.

Neither man is considered fragile, but it’s not hard to see Yodsanklai is the more sturdily built martial artist. The numbers would support that visual impression.

In close to a hundred more bouts, opponents have stopped Yodsanklai the same amount of times (5) that foes have scored KO wins over Souwer. Also, it’s been 14 years since an opponent KO’d Yodsanklai. Souwer’s most recent stoppage loss took place in February 2018.

Souwer is not in the best patch of his career. He’s lost his last two bouts and is desperately looking to come through with a massive win in the latter stages of his career. Yodsanklai hasn’t been as active in recent years, but he hasn’t lost in eight years, which spans 30 matches. He’s the hot kickboxer ahead of this bout.

Despite Souwer’s win over Yodsanklai, all signs point to the Thai legend exacting revenge and continuing his winning ways with ONE Championship. He figures to be the more durable, stronger and aggressive competitor in the ring for this bout. It will be a surprise if this one goes the distance.