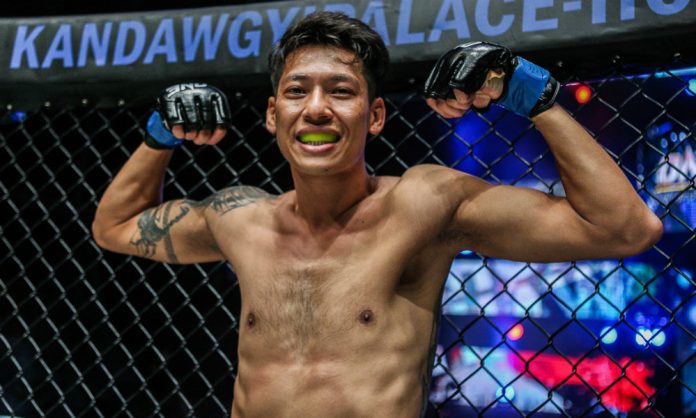 MMA fighter Phoe Thaw, who competes in the ONE Championship featherweight division, was seriously injured by a bomb blast in Yangon, Myanmar on Wednesday.

Myanmar, known as Burma until 1989, is currently in crisis.

The Tatmadaw attempted to justify its actions by claiming the NLD’s November election win was fraudulent. However, Myanmar’s election commission has emphasized that there is no evidence to support those allegations.

Since the Tatmadaw’s power-grab, which has officially been labeled a coup by the United States government, the streets of Myanmar’s biggest cities have erupted in protests. Those protests have been met with extreme violence. Clashes between the Tatmadaw, armed rebel groups like the Karen National Union (KNU) — who are reportedly protecting civilians  — and unarmed protestors, have left hundreds of people dead and countless more injured.

Phoe Thaw is among the latest to be affected by this violence.

A report on the military-owned Myawaddy TV network claimed that the fighter was injured while building a homemade bomb in his Yangon-based gym, Team PT. However, multiple sources close to Phoe Thaw told BJPENN.com that those allegations are unlikely to be true.

Other theories put forth by local sources suggest that Phoe Thaw was hurt by an unrelated explosion, or that he was targeted by the Tatmadaw because he is both a local celebrity and an outspoken critic of their takeover. According to one source, Phoe Thaw was concerned after several strangers showed up at his gym earlier this week, taking photographs and looking around.

Whatever the case, he was badly injured, sustaining severe burns and lacerations over much of his body, and required immediate hospitalization.

According to sources on the ground in Yangon, the Tatmadaw subsequently arrested Phoe Thaw from the hospital — despite his still being in serious condition. He is now being detained, along with his brother — a professional football player — and several others.

There are multiple recent examples of the military abusing, torturing and even killing those they have in custody.

Phoe Thaw is a mentor to dozens of young fighters in Myanmar. He is also a philanthropist, working closely with local organizations to empower young people through sport. He also cofounded a blood donation group and routinely donates himself.

Several notable members of the MMA community have already spoken out on this situation, including former two-division ONE Championship titleholder Aung La N Sang.

I’m sadden by the news about my good friend ko Phoe Thaw. According to News sources, he was involved in a bombing…

Posted by Aung La Nsang(Burmese Python) on Thursday, May 6, 2021