When we talk about the busiest fighters in MMA, we usually mention names like Donald Cerrone, Neil Magny and Thiago Santos — and rightly so. These fighters keep tremendously busy schedules, oftentimes shoehorning four or five bouts into a single year. Yet no discussion about busy fighters is complete without mention of ONE Championship featherweight Anthony Engelen. Over the last few months, the 33-year-old Dutch-Indonesian talent has kept a timetable that would make the average fighter’s head spin.

Engelen’s hyperactivity began at ONE: Heart of the Lion in mid-November when, after a brief hiatus, he made his anticipated return to the ONE Championship cage for a short-notice fight with Cambodia’s Meas Meul.

The luxuriantly bearded featherweight needed less than a minute to get the job done, scything his foe with a precisely-timed head-kick just 39 seconds into the first round.

It’s hard to imagine this fight going much better for Anthony Engelen, but he admits that it felt a little anticlimactic. He’d been hoping to show off the improvements he’d made to his game, but thanks to his own efficiency, he didn’t really get the chance to.

“Because it was a 39-second knockout, afterwards I had mixed feelings about it, because even though it was a fight on short-notice, you go in there and want to display your skills. When you only throw one punch or one kick and it’s finished, you of kind of feel like you have unfinished business. So after the fight there was kind of mixed feelings.”

Luckily for Engelen, the opportunity to get back into the cage came just days later, when ONE Championship called him and asked him to replace the injured Zach Zane against Filipino veteran Jimmy Yabo on November 17 in Jakarta, Indonesia. He didn’t hesitate to accept.

“Not at all,” he said when asked if there was any hesitation to fight again so soon. “I was happy that I got the chance to step up again and show my skills, especially because it was in front of my hometown in Jakarta. I was really happy I got that opportunity.”

This time around, Anthony Engelen got the chance to show off more of his game — but only a bit. Once again demonstrating his propensity for quick finishes, he found a path to victory before the first round had ended, grounding the fight, sinking in his hooks, and locking up a rear-naked choke for the tap.

“It went pretty good I guess,” Engelen said humbly. “After a few punches, a few kicks here and there, we finished it on the floor. I was able to show a little bit more of my skills, and it was a lot of fun.”

After two fights in two weeks, other fighters might be tempted to take a long break from competition — but not Anthony Engelen. The Dutch-Indonesian fighter is scheduled to return to action in less than two weeks’ time.

Engelen was originally scheduled to battle Cambodia’s Thai Rithy at ONE: Eternal Glory on January 19 in Jakarta, but after Rithy sustained an injury, he was  matched up with short-notice replacement opponent Won Il Kwon instead.

As ever, Engelen says there was no hesitation to accept this fight.

“I like staying busy,” he said. “It gives me some extra motivation to train harder every day. It keeps me focused. This is what we do. We train every day, we like to put ourselves to the test. If ONE can keep giving me fights all of the time, then I’m totally down for it.”

Not even the short-notice opponent change was enough to perforate Engelen’s zen.

“In the fight game, it doesn’t always go as expected,” he said calmly. “Things like an opponent change… it can happen. You can get a call for a fight only like two weeks in advance, and then you’ve got to be ready as well. In a way, that’s the way of a fighter. You can’t always prepare for everything. Sometimes you’ve just got to take it how it is.

While Anthony Engelen is unfazed by his busy schedule and his short-notice opponent change, he does expect his ONE: Eternal Glory fight with Won Il Kwon to be challenging.

“He is undefeated,” Engelen said of his South Korean opponent. “He’s definitely going to bring it. It’s also his debut in ONE Championship, so there’s a lot of pressure on his shoulders.”

“I’m going into this fight like any other fight,” he added. “I just have to go out there and put on a show and try to knock him out or go for a submission and just do my best.”

Engelen has been preparing for this imminent challenge at Bali MMA, where he ends long days of hard training — or getting his ass whooped, as he puts it — with stress-busting evenings by the pool or on the beach.

This is the first full camp he’s spent at this respected Indonesian training facility, and he feels like his time there has been tremendously fruitful.

“Training is going great,” he said. “This is actually my first time having a full training camp here in Bali. Until now I’ve only had stints here — a week here, a week there. This is my first time here doing a full-time camp. It’s been great. It’s hard training, every day, like getting my ass whooped every day, and that’s what I need. I need to train with good people in order to get better. And even though sometimes I get my ass kicked, afterwards I can chill at the pool or go to the beach and enjoy the sunset and it makes it all good. It makes me fresh to go back again for the next training.”

A post shared by Anthony The Archangel Engelen (@anthonyengelen)

Given the transformation he’s undergoing in the balmy air of Bali, Engelen is confident he can get the job done in Jakarta. While he prefers not to make predictions out of respect for his opponents, he admits that he does not plan on letting his fight with Won Il Kwon reach the final bell.

“I’m not too big on predictions because it kind of takes away the respect I have for my opponent, but let’s put it like this: I don’t like leaving it to the judges,” he said. “I’m pretty confident it’s not going to go three rounds. Me and my opponent are both going to bring it. At the end, I’m very confident it’s going to be me with my hand raised, and hopefully we both get out of this without any injuries. That’s what I hope for every fight.”

If Anthony Engelen is victorious in Jakarta, he’s likely to emerge as one of the top contenders in the ONE featherweight division — a perilous savannah prowled by predators like Christian Lee, Marat Gafurov, Li Kai Wen, Keanu Subba, Kotetsu Boku and of course, the reigning champion Martin Nguyen.

Engelen has tremendous respect for his rivals in the ONE featherweight division, but is confident that, with continued hard work, the finishes will keep coming. Even against top-flight opposition.

“The featherweight division is a stacked division,” he said, sizing up his competition in ONE Championship. “They’re all really good guys, really talented strikers and jiu jitsu guys.

“I haven’t had a chance against them yet, but I’m sure it won’t be long before I stand in the cage against them as well. Then we’ll just have to see where I stand. I’m pretty confident that I’ll do well.”

Whatever the future holds, the fearsome Anthony Engelen encourages fans to follow him, starting with his ONE: Eternal Glory showdown with Won Il Kwon. 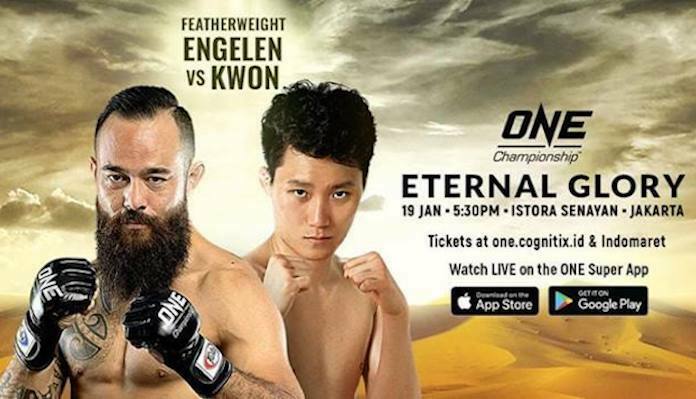 Engelen also reminds that this card will be ONE Championship’s first to air on television in the United States.

“This fight in Jakarta is actually going to be the first one to be televised in The States,” he said. “That’s going to be big for the fans as well. I would definitely recommend to everybody to tune in. Watch my fight, and also watch all the other fights because the card is going to be stacked.”

It has been an unbelievable stretch for Anthony Engelen, and he’s hoping that trend will continue into the New Year.

“Since November, it’s been really good, and I reckon that from here it’s only going to go up,” he said. “This is still the beginning. The year just started.”