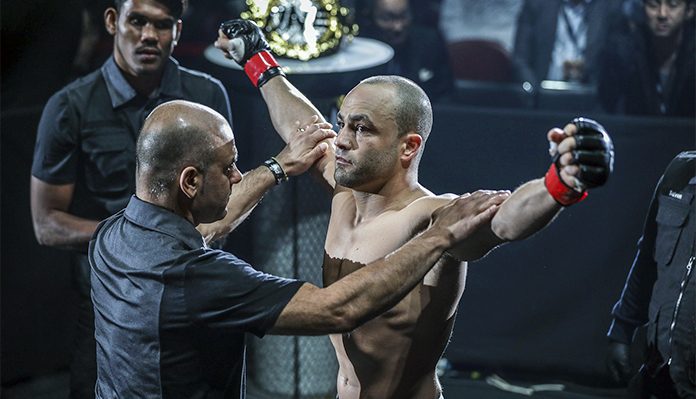 ONE Championship’s Eddie Alvarez has taken issue with Christian Lee saying he’s the best lightweight in the world.

Alvarez is set to return to the cage for the first time since August 2019 when he locks horns with Iuri Lapicus at ONE on TNT 1. A victory over Lapicus, who Lee beat back in October to retain the ONE Lightweight Championship, would take Alvarez to 2-1 with the promotion.

If that happens Alvarez would have a legitimate claim for a title shot against Lee – and he’d also be able to challenge Lee’s recent proclamation that he’s the best lightweight fighter in MMA today.

“I don’t want to come off as cocky, but I do feel that I’m the best lightweight fighter in the entire world,” Lee told Asian MMA. “And that doesn’t mean just ONE Championship, that means every organization.”

In response, Alvarez said the following to LowKickMMA.

“I think he’s well-rounded. He’s good, but no. The best in the whole world? No, he’s not,” Alvarez told LowKickMMA. “He’s not even the best in ONE Championship. If they just let me fight him. He’ll understand that and so will the promotion.”

“I think that’s it (after I beat Lapicus). I beat the former champion, two-time champion Eduard Folayang. Iuri Lapicus, he’s number two. I believe he is ranked number two and then that’s it. I feel like that’s it,” Alvarez said. “I don’t feel the need to prove myself. I’ve beaten so many champions throughout my career. I don’t’ know what we are waiting on. I don’t know what I have to prove more. I can beat the best guys in the world. Put me in front of your champion and I’ll beat him.”

While Alvarez will have to get past Lapicus for this fight to be set up, Lee will also need to succeed in successfully defending his title again. This time when he battles Timofey Nastyukhin—who knocked Alvarez out in—at ONE on TNT 2.

Will Christian Lee vs. Eddie Alvarez happen before the end of 2021? Let us know your thoughts in the comments, BJPENN Nation!