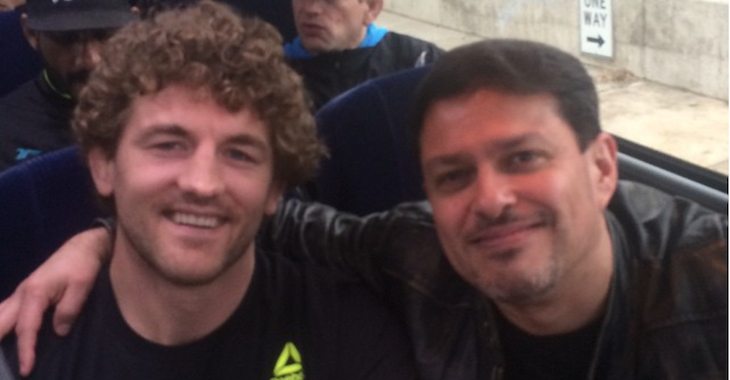 ONE Championship’s welterweight king Ben Askren has had a tumultuous relationship with the UFC and he’s never even fought for them.

Askren was released by Bellator a while ago and everyone assumed that the UFC would pick him up. But Dana White decided against it and ever since Askren has had no fear speaking his mind about the promotion.

That’s why when this photo (above) of Askren smiling with UFC matchmaker Joe Silva made its way around the internet a lot of fans wondered if maybe the relationship had been repaired and Askren may indeed be on his way to the octagon. Unfortunately that’s not the case arcading to Askren himself, who talked on Submission Radio.

“The Joe Silva picture, it was just like … that was the only seat left on bus when I got on. So I sat down and you know, obviously it was kind of awkward so I made the best of a not-so-great situation and kind of had a laugh of it. As soon as I sat down I said ‘if you’re going to make a proposition to me, the answer is no’. I kind of broke the ice right away, right off the bat. There was a lot of banter between everyone. I was talking to Roy Nelson and his wife, they were sitting next to us, Duke [Roufus] and Joe were talking. So you know there was a lot of people sitting there. So it wasn’t like he was the only person I had to talk to, fortunately.”