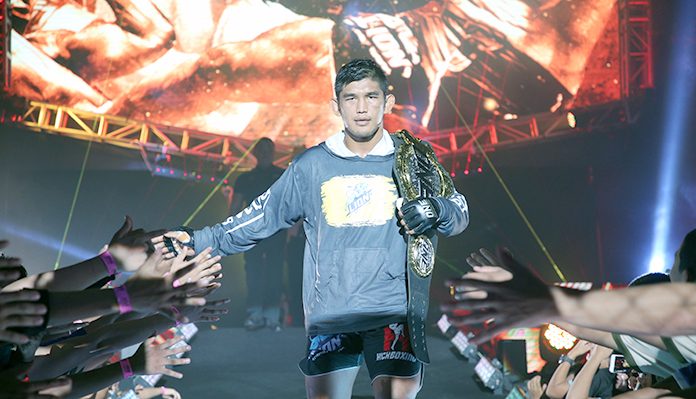 His sparring partners have felt the bone-crunching shots. And Aung La N Sang is adamant that he possesses more power than ever before as he prepares to put his ONE Middleweight World Title on the line.

“The shots that I throw are a lot stronger now. We gauge it (strength) with my sparring partners. They tell me ‘man, you’re hitting me with some good shots. You’re hitting so hard’.”

A dual world champion, simultaneously holding the ONE Middleweight and Light Heavyweight World Titles, Myanmar’s Aung La revealed he had made a conscious effort to increase his power and explosiveness while honing his technique.

“We’ve been doing more weights and more footwork drills,” explained Aung La, who is based at Fort Lauderdale’s Hard Knocks 365 gym in Florida.

“We have a coach that comes in to work on our footwork.”

Aside from a five-day holiday in Australia with former two-weight champion Martin Nguyen, Aung La has been pushing his body to the limits in preparation for the highly-anticipated rematch against Japan’s Ken Hasegawa at ONE: A NEW ERA in Tokyo on 31 March.

“I’m going to be the biggest, the strongest and fastest, the most explosive and most athletic I’ve ever been for this coming fight,” Aung La declared.

Aung La’s bout with Hasegawa is one of four title fights in Tokyo.

Filipino Eduard Folayang is putting his lightweight belt on the line against Japan’s Shinya Aoki in the main event. Aung La will challenge Hasegawa in the co-main event, while Singapore sensation Angela Lee bids to become the first female in ONE Championship history to hold two belts simultaneously when she attempts to take the strawweight strap away from China’s Xiong Jing Nan, and finally, Kevin Belingon defends the bantamweight strap in a rematch with Bibiano Fernandes.