Home » MMA News » ONE Championship » Angela Lee is excited to compete in Japan in a new... 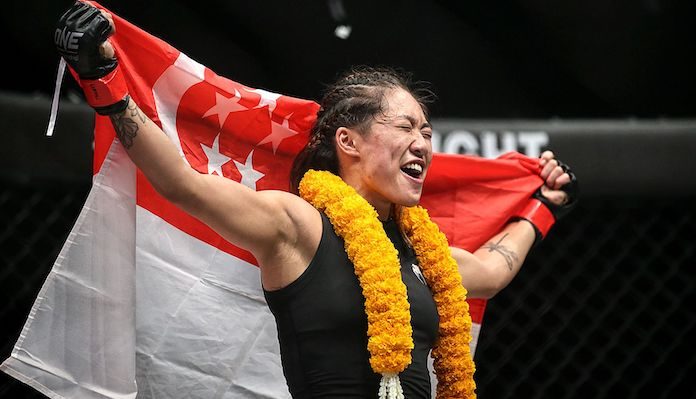 Undefeated ONE Women’s Atomweight World Champion Angela Lee is going to grace the Ryokogu Kokugikan on March 31 as part of a heavily-stacked main card at ONE: A New Era, and she couldn’t be more excited.

For the first time ever, ONE Championship has put together four World Title bouts on a single evening. This in addition to promotional debuts for Demetrious Johnson and Eddie Alvarez. To say that ONE’s first foray on Japanese soil is going to be epic would be a massive understatement.

Lee couldn’t contain her enthusiasm with her upcoming bout.

“I’m very excited! I think this a very special fight card here for the first time in Japan with ONE Championship and all the athletes are very excited,” Lee said. “Japan has a huge market for mixed martial arts and I’m very honored to be fighting here.”

Angela Lee is scheduled to face off against China’s “The Panda” Xiong Jing Nan for the ONE Women’s Strawweight World Title. A win would mean a second golden strap for Lee, and history as the first female two-division title holder in ONE Championship.

The chance to become a champ-champ has Lee fired up.

“This is the biggest fight of my career, by moving up in weight division it’s a very big opportunity for me to get a second belt and I’m very excited,” Lee said. “I’m feeling very motivated and I want to put on the best show of my career.”

Lee mentioned that she feels much more comfortable managing her weight at strawweight, which she says is closer to her natural weight. This, Lee says, will allow her to perform even better than she has in the past.

“I’m very excited and very happy to be fighting at the Strawweight Division because it’s closer to my natural weight,” Lee said. “Instead of running it’s just going to be a display of technique, drilling, and sparring. I feel that I’m going to be at my strongest at this weight division.”

With promising action-packed bouts between the top athletes of ONE Championship, Angela Lee guarantees that her bout ONE: A New Era will be one for the books. She invites everyone to tune in and see her in action.

“I would really like to tell everyone to fill the stadium and pack the arena,” Lee concluded. “It’s going to be a stacked fight card and I can guarantee you that this is one fight you don’t want to miss.”