Home » MMA News » ONE Championship » ONE: A New Era in Tokyo is absolutely stacked 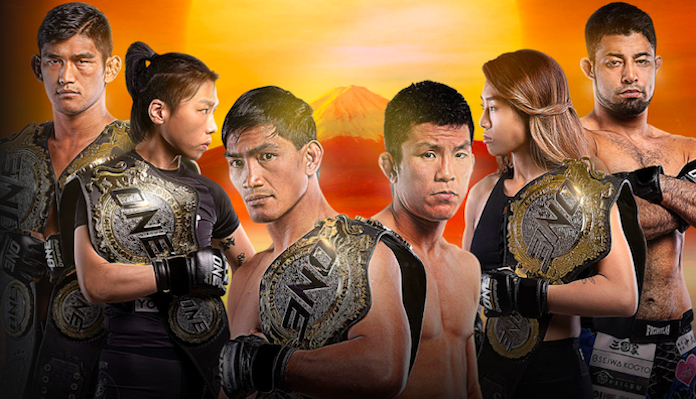 On March 31, Asian martial arts powerhouse ONE Championship will make its debut in the MMA hotbed of Tokyo, Japan with ONE: A New Era. This card, which will emanate from the hallowed Ryogoku Kokugikan Sumo Hall in the city’s Sumida ward, is absolutely stacked.

The card will be topped by a whopping four ONE Championship title fights, including one champion-versus-champion showdown.

At lightweight, champion Eduard Folayang, a true ONE Championship veteran, will look to defend his belt against a man he’s beaten once before, Japanese legend Shinya Aoki.

At middleweight, champion Aung La N Sang, who also holds the light heavyweight title, will rematch Ken Hasegawa, who he defeated by knockout in a 2018 Fight of the Year contender.

At bantamweight, new champion Kevin Belingon will look to even the score in a trilogy fight with the man he won the title from, Brazilian star Bibiano Fernandes.

And finally, at strawweight, reigning champion Xiong Jing Nan will look to defend her title against atomweight champ Angela Lee, who climbs up a weight class in a bid to become a two-division ONE Championship titleholder.

But that’s not where the fun ends.

The card will also feature the ONE Championship debut of former UFC and Bellator lightweight champ Eddie Alvarez, who will battle Russian juggernaut Timofey Nastyukhin in the last quarterfinal bout of the ONE Lightweight World Grand Prix.

Former UFC flyweight champion Demetrious Johnson will also debut on the card, taking on Japanese knockout artist Yuya Wakamatsu in the first round of the ONE Flyweight World Grand Prix. The card will also feature all three other flyweight quarterfinal bouts.

Finally, the card will feature a ONE Super Series Featherweight World Grand Prix quarterfinal bout, as Muay Thai legend Yodsanklai IWE Fairtex collides with Andy Souwer in a bid to advance to the second round.

To reiterate, ONE Championship has absolutely stacked the deck for its upcoming debut in Japan.

Here’s the ONE: A New Era lineup as it currently stands

What do you think of the lineup for this ONE Championship card in Tokyo?