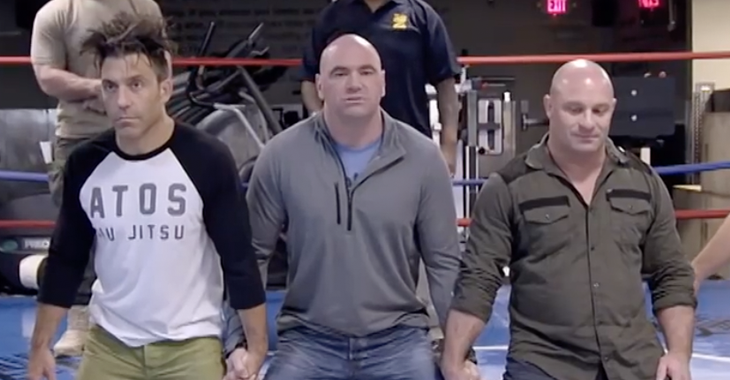 The argument of what has caused “Nick The Tooth” to depart from the “Dana White: Lookin’ for a Fight” series is going back and forth between Matt Serra and “Nick The Tooth.”

Last Wednesday, Serra who is starring in the “Dana White: Lookin’ for a Fight” series along with UFC President Dana White and now Din Thomas, spoke with Bruce Buffer on his “It’s Time” podcast. On the podcast, Buffer asked why “Nick The Tooth,” who originally started the series, was no longer a part of the crew.

Serra went on to explain his recollection of it all and ultimately said that White told him that he and “Nick The Tooth” almost got into a fistfight.

Nick went on to Buffer’s podcast a week later and gave his explanation of why he left the show. Nick explained how a few instances, which included them getting tasered to a grappling session between Serra and himself was set up for him to look bad.

Serra caught wind of Nick’s recollection of it all and took to the UFC Unfiltered podcast on Wednesday where he further went on to roust his former co-star.

“Back to this fricking moron,” Serra said. “He’s like, ‘Oh well, why would I get upset if a black belt submitted me? I didn’t know what was going on. First of all, I wasn’t warmed up. The first thing you hear me say on that episode when we’re at that academy is that we’re not warmed up.’ And that’s not f—ing true, Serra said of Nick’s explanation.

“The first thing he said after I’m getting done with the technique, you hear me go to the guys, ‘Anything else?’ You hear “The Tooth” in the background go ‘Let’s roll.’ You hear the motherf—er, ‘Let’s roll.’ That guy was ready and he knew what we were doing. I didn’t tell the guy to wear a freaking rash guard with his school or anything like that. So I mean, the guy wore a rash guard. The guy knew exactly what was going on. He’s rolling, he’s going inverted, trying all this shit that I’m slapping away. And of course, what happens is what we all expect to happen, and I just did what I wanted with the guy.

“But, again, it’s not some big feather in my cap dude. I got some stuff I did in my life, and that’s not one of them. I’m not bragging.”

Serra then goes into Nick’s explanation of saying that his instructors, the Mendes brothers and their academy would be tainted with the way everything was shown on the show and Serra had a stiff rebuttal.

“Are you a f—ing moron? These guys are world champions,” Serra proclaimed. “The only slack they should be getting is why they let a f—ing retard like you in and train at their academy and call out higher belts and then roll with that guy wearing one of their rash guards, you f—ing moron! I mean, that guy is a f—ing idiot!”

Serra then went on to say that he admires the Mendes brothers and it was Nick who positioned the whole thing as an academy vs. academy type of situation.

“I’m extremely pissed off,” Serra stated. “Now it’s no longer me and ‘The Tooth.’ It’s me trying to make his school look bad. Dude! I’m not that guy!

“I like his instructors. I don’t know them personally. They come up with nice stuff. They’re very good at taking the back, the berimbolos, and the Mendes brothers, they’re very good! These guys are phenomenal world champions,” Serra proclaimed. “I have nothing against these guys. How dare you, man. Why were you bringing them into it? You’re the moron that’s trying to say you’re representing their school! Nobody gives a crap. Nobody is gonna look at you and me rolling and say, ‘Oh wow! Where does he train? They must suck.’ No Tooth, you suck. You know what I mean? Don’t bring these guys into your battle.”

Have you heard all sides to the story? What are your thoughts on the situation that seems to have Matt Serra quite upset. Sound off in the comments!