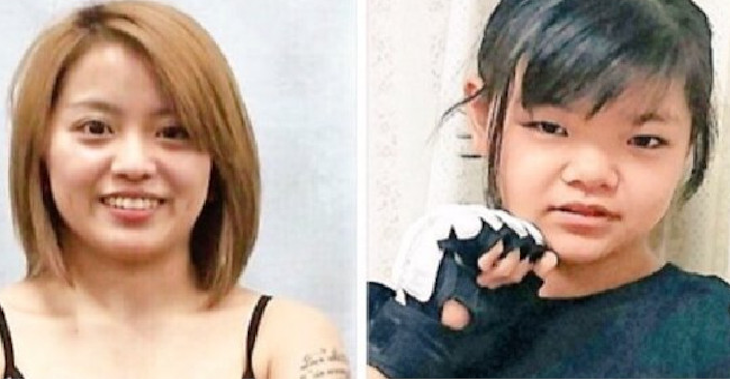 Saturday afternoon in Tokyo Japan, 12 year old Momo made her highly anticipated MMA debut after making headlines quite some time ago for signing to fight a 24-year old in her MMA debut.

It didn’t take long for the much younger Momo to lock in a rear naked choke against 24-year old Momoko Yamasaki under the Deep Jewels banner this weekend at Deep Jewels 16. The bout took place at the ‘minimumweight’ division of 95 pounds, and was of course an amateur MMA bout. As a result of the fight being an amateur one, headgear and shin guards were worn by both competitors. Regardless, the win marked a successful MMA debut for the young prospect.

Below you can see pictures of Momo locking in the rear naked choke that ultimately put her opponent to sleep:

Prior to the fight, Momo’s opponent posted on her Ambelo page to respond to criticism which she received for taking a fight against a child. Momoko Yamazaki stated:

“I will participate in amateur rules,” she said on her Ambelo page. “Because I was missed due to a previous injury, I will be careful not to get hurt this time. When you look for your opponent in your class, LOL, smile becoming a super junior high school student. The size of the body does not change. Career is much longer than mine. I think that it is a fairly strong child, so I will defeat her without mercy. Thank you for your support!”

Ironically, the criticism Yamazaki received for what many perceived to be taking an easy fight against a child, wound up being a nonissue given the outcome of the fight this weekend.