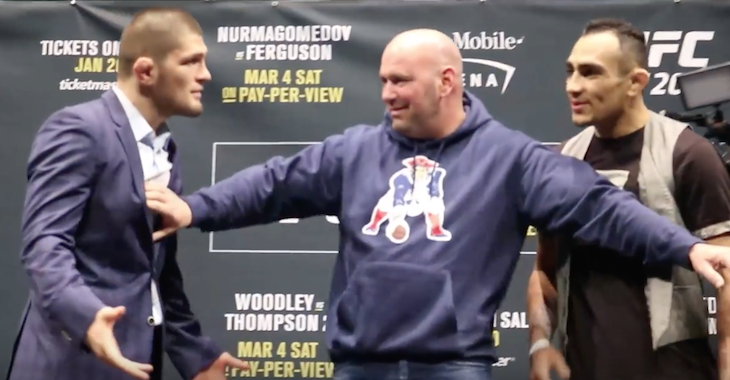 Last night, in the co-main event of the stacked UFC 219, Dagestani lightweight contender Khabib Nurmagomedov picked up yet another dominant win, brutalizing the dangerous Edson Barboza for three rounds, and ultimately capturing a clear unanimous decision.

While McGregor has not yet publicly reacted to Nurmagomedov’s insane win, Ferguson has, and he doesn’t seem all that impressed. In a Saturday night post to Twitter, Ferguson promised to “drop” Nurmagomedov, and eventually, move to welterweight.

Don’t Care If The @ufc Approves, I’ll Cut @TheNotoriousMMA … Drop @TeamKhabib & Move Up To Welterweight Either B4 Or After I’m Done w/ This Division & Rid It Of The Trash At The Top. Pollution Has Accumilated Over The Years, Time To Clean House #DefendOrVacate🖕🏽😎-TheeChamp https://t.co/l6XkH50ZQY

“Collecting Coins & Shit” #TUFChamp 170lbs All Knockouts #LightweightChamp Mostly Submissions Do The Math, I Got This Shit, 2018, Watch The Fuck Out, The Man… The Myth… The Legend … El Cucuy’s Coming… pic.twitter.com/4IcyrYq5XH

Post-fight, Nurmagomedov actually had some nice things to say about Ferguson, calling him the owner of the “real belt” while simultaneously discrediting McGregor.

“Real belt is 25-0,” Nurmagomedov said (h/t MMAFighting.com). “This is real belt. They’re all fake belts. To be honest, real belt is Tony Ferguson. Conor, he has only one fight in UFC at 155 and he have champion. He beat Eddie Alvarez. He’s good fighter, but he’s not champ. I think lot of people can beat him in 155. This is my opinion. I think lot of people can beat him at 155. He has good boxing, good timing, but he don’t have wrestling, he don’t have grappling, he don’t have conditioning, but he have a belt.”

How do you think a matchup between Khabib Nurmagomedov and Tony Ferguson would go?