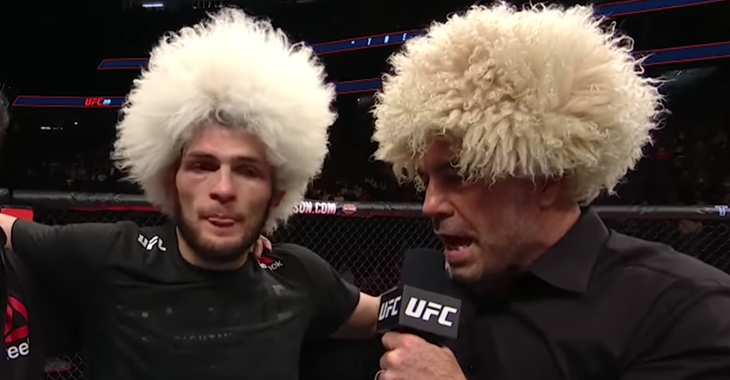 Last weekend, in the co-main event of the stacked UFC 219, lightweight contender Khabib Nurmagomedov improved to an insane 25-0, brutalizing the dangerous Edson Barboza to a lopsided unanimous decision victory. With this win, Nurmagomedov stands out as the irrefutable number one contender at lightweight – whether his shot comes against interim champion Tony Ferguson or undisputed champion Conor McGregor.

Speaking on a recent episode of The Joe Rogan MMA Show, UFC color commentator Joe Rogan discussed Nurmagomedov’s position in the stacked UFC lightweight division. In his opinion, the Dagestani fighter is now the most terrifying lightweight contender in the world.

“He’s just on such another level that the odds of beating him drop significantly after the first minute-and-a-half,” Rogan said (h/t MMAJunkie.com). “You saw the look on Barboza’s face: Two minutes in and he’s trying to get up. You saw the look on his face and it’s like, ‘(expletive), how am I gong to do deal with this?’ It’s just so next level.”

“Khabib, after this performance, has set it up to a place where he’s the most terrifying lightweight contender in the world,” Rogan said. “Then you have Tony Ferguson, whose a (expletive), and has the interim championship, then you have Conor – who knows what happens with him? I think the UFC’s going to give him some time, let the holidays pass, see what the (expletive) happens and then make some moves.”

While Nurmagomedov has recently exchanged some heat with McGregor on Twitter, his manager has also asserted the current focus is on a possible fight with Ferguson.

To be clear I talked to @TeamKhabib . Our main focus is @TonyFergusonXT he deserves the next ass whooping. He earned it. And for the former UFC champion @TheNotoriousMMA he can stay on the boxing side. Bye bye ✋🏽@danawhite

Who do you want to see Khabib Nurmagomedov fight next?