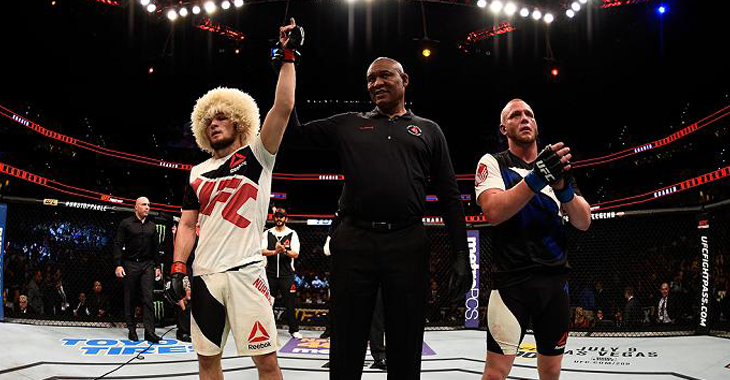 On Monday night, UFC 205 finally got its main event. The card, which will mark the organization’s debut in New York City, will be headlined by a lightweight title fight between reigning lightweight champion Eddie Alvarez, and current featherweight king Conor McGregor.

This news, unsurprisingly, sent most of the fight game into a frenzy of excitement. Unfortunately, not everyone was thrilled with this news. Undefeated lightweight contender Khabib Nurmagomedov falls into the small segment of the fight game that was disappointed by the news – but his disappointment is certainly understandable. He was, after all, recently promised a shot at Alvarez’s lightweight title by UFC President Dana White himself, only to have that promise yanked away with the booking of Alvarez vs. McGregor.

Reluctant to dwell on this unfortunate twist of fate, however, Nurmagomedov quickly began weighing the options for his next fight, and even addressed a Twitter callout from Michael Johnson, who is riding high after a blistering KO of Dustin Poirier.

As Tweet above shows, Khabib was immediately up for a possible scrap with Johnson. And apparently, the UFC was too.

During the official press conference for UFC 205, UFC President Dana White announced, mid-sentence, that he’d forgotten to mention that this lightweight showdown had been tacked onto the card’s lineup.

“Oh – and I forgot to say this too: Michael Johnson and Khabib [Nurmagomedov] are on this card too,” White said.”How the hell did I forget that?” White went on to insinuate that this lightweight showdown would probably be relegated to the event’s undercard. While this would be something of a travesty under normal circumstances, it’s certainly understandable on a card as stacked as UFC 205.

So there you have it. Just when it was starting to look like UFC 205 couldn’t possibly get any more stacked, it went and got more stacked. What do you think of this massive card’s lineup? Sound off, PENN nation!