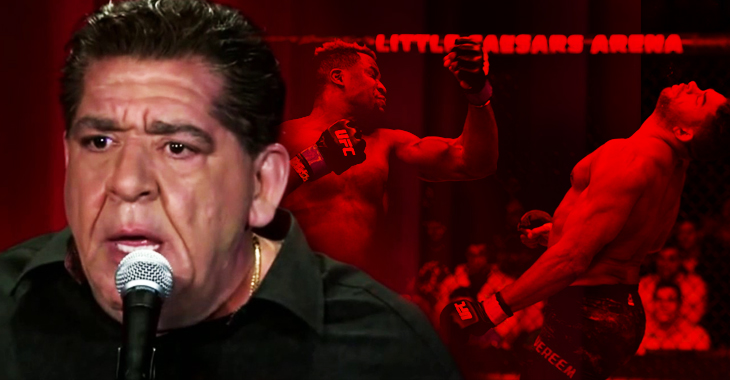 We are all still catching our breath from UFC 218 as we land in the middle of yet another fight week. That Detroit card is one of those line-ups of fights where you lose your voice from screaming and your legs are sore the next day from jumping on and off the couch reacting to the action. Nothing can compare to the undisputed king of reactions, Joey Diaz though. On Sunday, Diaz took to Periscope to give his reaction to the fight and it didn’t disappoint. You may want to make sure there are no children in the room when you blast this spirited review.

“The fights were tremendous last night. I just want to give my f-cking shout out to my man Mr. [Eddie] Alvarez. I didn’t think he could do it, but he f-cking did it. That Jason Strahan [Justin Gaethje] dude is the f-cking – what’s his name? Jason Gadahoop, whatever – He’s a f-cking savage with heart. [Alistair] Overeem? That Magoomba – whatever his name is – Ngaio? Let me tell you something, I don’t even want [Francis Ngannou] blowing out the candles at my birthday party. Next thing you know, the cake is all over the f-cking place, you follow me?”

Enjoy the belt while you can and say your farewell before your next fight .#AndNew https://t.co/30i41ZKP5b

“That Ngaio, Magoomba, whatever his f-cking name is, that’s a bad motherf-cker, you understand me? [Stipe Miocic], you better start eating those hot beef sandwiches with the sausage in the middle. You better bulk up, do push-ups, you better go to Mexico. That’s a tough motherf-cker. But listen, the immigrant mentality is always there. You follow me? You keep showing up and you don’t give a f-ck. Just because you got beat up one day, you show up the next day with a roast beef sandwich.” — Joey Diaz speaking on Sunday’s The Morning Joint.

He never gets the names right even though you know he knows the fighters and he serves up info like no one in the world. His boy Eddie Alvarez from Philly did it again and Francis Ngannou probably made him have a panic attack. Regular listeners will know that Joey Diaz is a huge fan of Stipe “Stiopic” Miocic, but even he is worried that the literal next-big-thing Francis Ngannou could un-crown the champion. He’s not the only one though, so do the latest odds that were released.