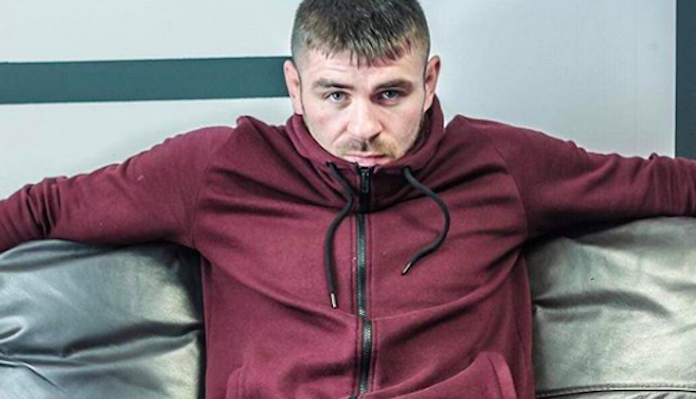 “Let’s rewind back to 2012 when I was at the height of my MMA career, had taken out a couple of big names and was on a high. I’d been given the opportunity to fight for a belt, I did…and got knocked clean out in the first. I was shattered and heartbroken and took time off, carrying on with what I thought was living, but by living I mean absolute madness…”

I first came across the opening to the above Facebook post, written by the twenty-nine-year-old Graham Mc Cormack, an ex MMA fighter, and current MMA trainer at Straight Blast Gym (SBG) Cork City, last month. Naturally it left me curious, and so I clicked on his Facebook account.

What I found was an outpouring of honesty and wisdom from a young man who was has been through the wars.

Speaking openly online about his experience with severe episodes of anxiety, depression and self-harm, along with his hospitalization following multiple attempts on his life, Mc Cormack’s mission to destigmatize mental illness through the power of language quickly became apparent.

As I write this, I am conscious of not turning his story into a click bait sensational piece. This article has been written with the purpose of helping any man or woman who has too experienced difficulties with their mental health, and who just happens to be an MMA fan. It’s why I decided to reach out to Graham via social media, and why he thankfully, was more than happy to share his story further.

It’s by no means an easy read. Graham Mc Cormack feels no shame when it comes to discussing his experience with mental illness…and why should he?

“I started training MMA in July 2010. I was young, a bit overweight and angry with the world.” He tells me in that direct manner I have become accustomed to. “I did what most people would have done, worked all week and partied hard at the weekend. Now it had caught up with me at points… I always questioned my direction in life and at times I couldn’t see a future. But one day I had enough and googled regular gyms. Funnily enough an MMA gym popped up first. It had recently opened and was doing strength and conditioning classes, so I went up, had a look around and got stuck straight into it.”

“As I started training away the excitement was massive, this new sport had blown me away especially BJJ which I took to straightaway. The gym itself was 5 minutes up the road from me, I was there from the second them doors opened until they closed. I remember the owner one evening jokingly saying ‘do you ever go home?’ – I couldn’t get enough of the place and its classes.”

Graham’s hard work and passion did not go unnoticed. Four months in he was offered the opportunity to fight for Cage Warriors, the popular London-based MMA promotion. Both unaware of and unprepared for the magnitude of the event, he accepted.

“The night of the fight I was overwhelmed by anxiety and it was driven by the huge production. I lost that fight but went on a tear up after it, taking out big names on the Irish circuit including James Heelan who recently fought John Wayne Parr at Caged Muay Thai — me and James are good mates now. I received my blue belt under Michael Russell, went 5–3… And then it all came crashing down. “

“My lowest point was in 2012.. I got the opportunity to fight for my first ever title. During the walk out I wanted to throw up…the anxiety and absolute fear of it…all that was fuelled by a lack of self-belief. We touched gloves and seconds later I was out cold, on the floor – he had knocked me out by shin to chin. The worst feeling was waking up and having to walk through the crowd – it was filled with drunk people – there was a group of them laughing together… I felt as low as a human could feel.”

“After the title fight things went from bad to worse,” Mc Cormack continues, “I’d always used alcohol and drugs from a young age, so it tied in with my career. If I won I partied hard, if I lost I partied harder. That loss for the belt in seconds sent me spiralling out of control, mentally and emotionally and…everything went through the roof.”

This was Mc Cormack’s rock bottom, and he quit the sport.

Within the space of five years he was diagnosed with Crohn’s disease, borderline personality disorder, and found himself in a psychiatric ward several times.

“I attempted suicide three times,” He states, and once again I find myself impressed by his no-nonsense approach to discussing subjects that often viewed as taboo. “I had self-harmed so bad I nearly had to have my hand amputated. I ended up homeless for three months, lost two relationships, wasn’t allowed to see my daughter for a short period of time, friends left me, my poor family had enough, my drug debt was getting bigger and bigger — as was my self-hatred. To top it all off I ended up 18 stone 10lbs (253 lbs) from all the medication I was on, even though I used to fight at 11 stone (154lbs), [at] lightweight. Yeah, to say my life was crazy at that time is an understatement.”

Yet throughout this turmoil, Mc Cormack kept in contact with various support services. This resulted in a recommendation from his psychiatrist for a treatment which was to help him tremendously.

“I was a candidate for what is called Dialectical Behavioural Therapy or DBT,” He tells me, “my psychiatrist had put my name down as a last resort… every other thing she had tried had failed. I started the course in 2014 and it was one whole year of intense mindfulness, coping skills alongside addiction recovery, and it was a total success for me. It was a journey of self-awareness with a 50/50 outcome. Unfortunately two others took their lives during the course which was absolutely heartbreaking as I really got to know them on a deep level. So I was lucky.”

From there, through his own determination and will, along with the help he had so vitally asked for and received, Graham went from strength to strength. He was deemed well enough to be released from the mental health services in Cork and allowed to return back home.

“My medication was dropped, I could see my daughter again and, on the 31st of October 2016, I gave up alcohol and drugs for good. Things were great, I was naturally feeling all life had to offer, but then in January 2017 an old friend and training partner from the early days took his life. I’ll always remember his cremation and saying to myself ‘I’ve fucking had enough.'”

In the meantime, Mc Cormack was back training at SBG, had lost over 5 stone (70lbs), and was looking sharp. Despite being sought out for another title fight, an MRI which showed spots on his brain was to result in him being declared medically unfit to fight. It was time for a new direction.

“I couldn’t fight so I had to go another route and was brainstorming the entire year…then in December 2017 I put up my life story for those who think they are alone in the utter darkness, that no one has ever been there… I wanted to show others that I have mine and I have come back over and over and over again. The story was seen by 46 thousand people, the response was crazy. Since then I have been blogging about everything from personal development, mental health, addiction, weight loss, mindfulness and spirituality and I’ve gotten great feedback at every post.”

And MMA in particular, how has it helped Graham in his recovery?

“I always say that martial arts are huge for dealing with and healing any negativity in the mind or body. Martial arts is movement, movement is life. We never stop moving in modern life so why not make it a worthwhile movement. Join a jiu jitsu club, take up MMA, there are so many options out there. Classes in gyms are on at set times and this means self-discipline, you can’t be late. Self-discipline with diet, you eat crap, you feel like crap. Self-discipline of mind, no ego on the mats, any attitude is a no-no. You have to be humble and respectful. It’s character forming for the better.”

I almost feel ridiculous asking Graham about his upcoming plans and goals, considering all that he has overcome and achieved, but he beats me to the punch before I can think about my question further.

“My goals right now are to spread the seed of hope to as many troubled minds and hearts as possible. This is my dharma, my giving back and if I can truly help one person that would mean the world to me, but it doesn’t stop and neither will I.”

“To anyone who is struggling at the moment with whatever it may be, make sure you are opening up to at least one non-judgemental person. If you think you can’t find one then join an Internet mental health forum, join a group, the key is to talk, talking releases that pent up negative energy and as the saying goes ‘a problem shared is a problem halved.’ If you or others feel you need more help then your doctor is the next step, you will be in capable hands and if you take anything from my struggles above is that there is no shame in seeking help. Be optimistic, change is inevitable, and you are loved more then you know.”

You can follow Graham on Instagram @therealworldbuddhist and find him on Facebook under his full name Graham Mc Cormack. Graham also blogs on a website called fitguru.ie He also works with SBG Cork City and Cobh Marital Arts Club in Ireland.