Home » MMA News » Exclusive MMA Interviews » Spurred on by the words of his father, Yoshihiro A...

Yoshihiro Akiyama is feeling the pressure.

After almost four years of inactivity, the 44-year-old Japanese-Korean star is just hours away from the first fight of his comeback, and as the clock runs down, the tension is mounting.

He feels strong and well conditioned, but he worries that it might be difficult to find his groove after such a lengthy hiatus.

“I have very good conditioning right now, my conditioning is perfect. The only thing I’m concerned about is that it has been a long layoff,” Akiyama told BJPenn.com, speaking through his interpreter in Shanghai. “I’m just worried about if I can still do it — not just do it, but do it well. I want to do good, not just do it.”

“I’m not excited,” he added candidly. “The only thing I feel right now is pressure.”

Akiyama’s comeback fight goes down Saturday at ONE: Legendary Quest in Shanghai, China, where he’ll meet Malaysia’s Agilan Thani. Thani is the owner of a solid 8-3 record, and has already fought for the ONE welterweight title. He’s also only 23 years old — more than 20 years younger than Akiyama.

“Agilan Thani and I have a 20-year gap in age,” Akiyama said of this disparity. “If had a kid at an early age, he could be my son.

“I believe that Agilan is younger, has more stamina, is stronger, and he probably has better hand-eye coordination than me,” he continued. “I have to admit, I think Agilan is better in all aspects — expect one thing, which is my experience. Every time I close my eyes to try to go to sleep, any time I have free time, all I think about is how I can use that experience to win this fight.” 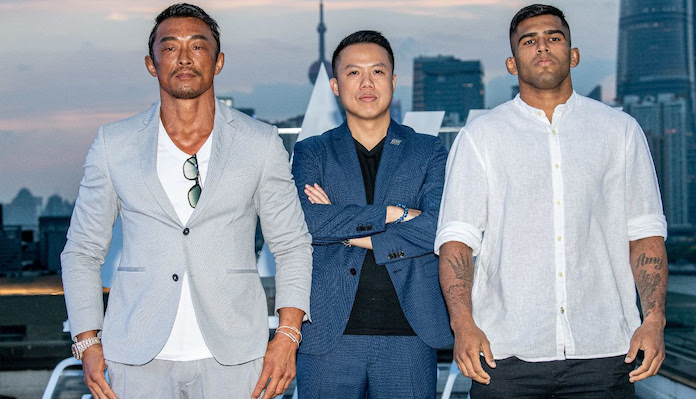 While Yoshihiro Akiyama is well aware of the challenges that wait for him inside the ring in Shanghai, he is confident that fighting again is the right decision. He was taught by his father, also an accomplished judoka, to constantly seek out new challenges. It was this pearl of fatherly wisdom that influenced him to mount his comeback.

“The reason why I came to ONE Championship is first and foremost because of my father’s teachings,” he said. “From when I was a baby, my father always said ‘challenge yourself, always challenge yourself if you have the chance to.’ My father is judoka, so he knows a lot about martial arts also. I felt that I could still challenge myself, so I took a challenge.”

If Akiyama is able to topple the challenge that is Thani, he hopes to shoehorn as many fights as possible into the remaining years of his career.

“I’m not young,” he said. “I have aged. I can’t fight for another five or six years, it’s impossible. So as much as possible, if my body is moving, and if I still feel like I can do this after fighting Thani, I want to fight as often as possible.”

While Akiyama’s priority is staying busy, that doesn’t mean he doesn’t have his eyes on the ONE Welterweight World Title, which is currently guarded by ferocious Swede Zebaztian Kadestam. The belt, the Japanese-Korean star says, is always the goal — though he understands that winning gold is a bit of a long shot.

“Of course as a martial artist, the final goal is always to be the champion, and that’s what motivates me,” he said. “I will fight with anybody the organization puts in front of me, but of course, if I could fight the champion for the belt, I would be very happy. At the end of the day that is my ultimate goal.

“To sum it up in a few words, Kadestam is a very good and dangerous fighter,” he added. “To be honest, if I fight him now, I only see 30% chance of winning.”

Akiyama is also open to a ONE Championship rematch with fellow UFC veteran Vitor Belfort, and perhaps even a move down to the promotion’s stacked lightweight division.

“I would love that rematch [with Belfort], but I hope he would come down to my weight,” he said. “I’m not thinking about going up to middleweight. I’m thinking about welterweight and lightweight. I want to go down, if I can, not go up.”

In addition to his fight-related goals, Yoshihiro Akiyama also has some more noble ambitions.

He hopes that by performing well in ONE Championship, he can influence the promotion to host a blockbuster event in Korea, giving the countless young fighters in the country the chance to compete on a big, international stage.

“In Korea right now there are hungry athletes who are not yet popular who deserve a chance,” he said. “By representing Korea very well, I hope that ONE Championship will go to Korea, host a very big event, and those deserving Korean athletes can get a chance to fight for ONE Championship also. I hope that I can help them out.”

Akiyama also wants to remind all the 40-somethings out there that they should continue to sniff out new challenges, even when they feel like it’s too late to do so.

“I’m 44, turning 45,” he said. “I want the people to see that even at this age, I’m seeking a new challenge, I’m trying hard, and I’m working hard for it. I want to motivate the people to do the same. I know that average 44, 45-year-old people still go to work, they’re tired, they don’t have any motivation for life anymore. I hope that people watch this fight and think ‘I want to find challenges for myself also, I want to do this, I want to work hard and someday reach my goals also.’ I want to motivate those people.”

Needless to say, Yoshihiro Akiyama still has plenty of goals as a martial artist. Most of those goals seem to hinge on his being successful against Agilan Thani in Shanghai on Saturday.

Although the pressure is high, and doubts surrounding his layoff and his age have crept in, he is confident he’ll find a way to win.

“I am always talking and strategizing with my coaches, but the final game plan, the final picture hasn’t been drawn yet,” he said. “But I have a feeling, thanks to my experience, I’ll find a way to win tomorrow during the fight.”