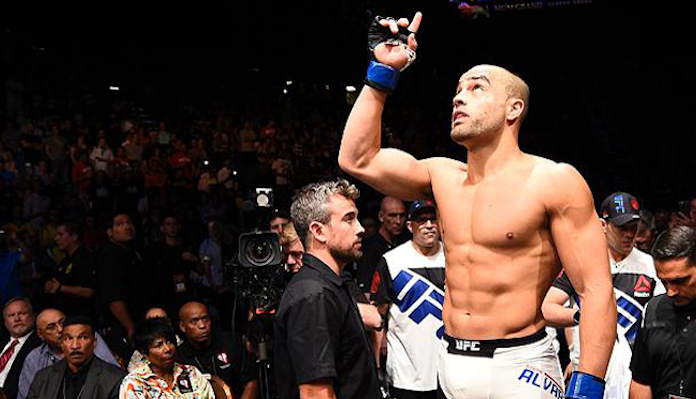 Last weekend, in the main event of UFC 223, Khabib Nurmagomedov captured the UFC lightweight title with a decision win over last-minute replacement opponent Al Iaquinta. While Nurmagomedov’s title win, which moved him to an insane 26-0 overall, wasn’t entirely flawless, it did strengthen his reputation as a seemingly unbeatable fighter.

While many fight fans are becoming increasingly doubtful that Nurmagomedov can be stopped, former UFC lightweight champ Eddie Alvarez isn’t buying it. In fact, he believes he’s the man to beat Khabib—and he thinks we all know it too.

“I am Khabib’s Kryptonite,” the former champ told Justin Golightly in a Sunday Instagram Live Q&A (transcribed by MMAFighting). “You all know it. It’s the elephant in the room. I’m the guy in the lightweight division, the only guy, that can beat Khabib. Everyone knows it. He can run to Georges [St-Pierre] or run to Conor [McGregor] or run to whoever, I’m the guy. I’m the guy to put that ‘1’ in that loss column.”

Alvarez assured that he has renewed focus to work his way back to a lightweight title shot.

“I will be gunning for the lightweight championship belt,” he said. “Khabib’s gonna take some time off, I believe, for prayer and reflection. I don’t know where that leaves me but I’m gonna sit down with the UFC and let them know, I’m the guy to dethrone this man, I’m the guy to give him his loss. I beat champions, that’s what I thrive on. I love belts. I love collecting them. I love beating champions.”

“Khabib is king – temporarily,” said Alvarez. “Everything is temporary. . . Let ‘The Underground King’ do it one more time and get that belt back.”

Do you share Eddie Alvarez’s confidence that he’s the man to hand Khabib Nurmagomedov his first loss? Join the conversation in the comments section.