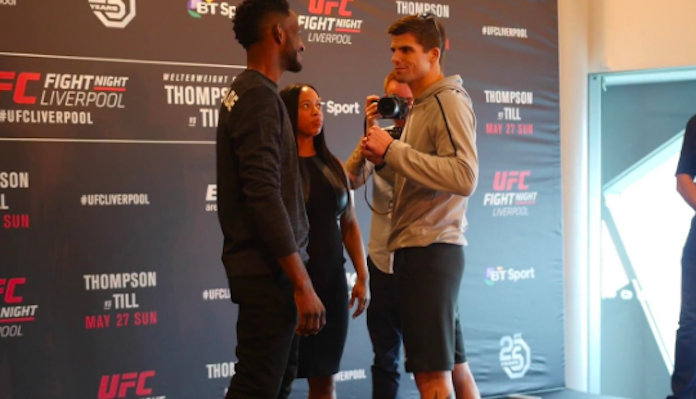 If things had gone according to the original plan, Neil Magny would have fought Gunnar Nelson in the co-main event of last month’s UFC Liverpool card. Regrettably, Nelson was forced out of the fight with an injury, leaving Magny without a dance partner. Enter Craig White.

White, who had been fighting in reputable UK promotions for years, but had never set foot in the Octagon, stepped in to replace Nelson against Magny on just two weeks’ notice.

Apparently, however, there was a brief period during which he considered not accepting this short-notice UFC debut. When he got the offer, he was roughly 216 pounds — a whopping 46 pounds above the 171-pound welterweight limit he’d be required to make on the eve of fight night. Given that he’d previously endured a hellacious, 40-pound cut for a fight with Paul Redmond, he knew he was in for a truly brutal stretch if he accepted. But accept he did.

“In that moment, the Redmond cut was the first thing that crossed my mind,” White told MMA Fighting’s Peter Carroll. “At that stage, I was out of camp and I was the heaviest I’d ever been. All I could hear in my head was, ‘You’re 98 kilos (216-pounds) — what the f*ck are you doing?’ Two seconds later I accepted the fight.”

Once he’d accepted the fight, White immediately dedicated all of his attention to losing weight. What followed was a terrible weight cut that he claims would have made Darren Till’s infamous UFC Liverpool cut look like a walk in the park.

“The Till video is a strange one for me,” he said. “There are parts of it where you can see that he’s struggling and I definitely sympathize with him. I just don’t get why you need seven or eight guys to do these things with you. Another thing I couldn’t help but thinking was, ‘If people saw a video of my weight cut it would have made Till’s look easy.’

“I was doing two 15-minute baths for every hour. I started at eight at night and I didn’t go asleep until two in the morning. Then I got up at five in the morning and I did another four baths. Normally I can do 82 kilos (180-pounds) to 77 kilos (170-pounds) in five or six baths, but it took me 14 [baths] in total to hit weight in Liverpool.”

Craig White would ultimately lose his short-notice bout with Magny by first-round knockout. Yet given the way he stepped up — and the sacrifices he made to hit 171 pounds — he’s bound to get many more chances in the UFC’s Octagon.