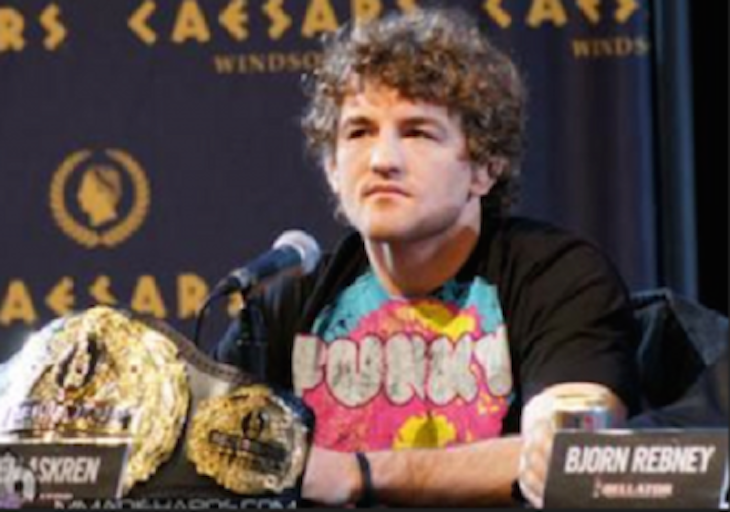 Ben Askren has made it no secret his retirement has one, big Canadian asterisk. He’s only coming back to fight Georges St-Pierre to finally prove to all the naysayers that, despite the fact that he never fought in the UFC, that he’s the very best welterweight in the entire world. But what if that fight can’t happen? What about a money fight with the likes of Nate Diaz or even Conor McGregor? Don’t get your hopes up. Askren essentially shrugs at the names and says he’s going to stay on course in campaigning for a fight with GSP.

“Nate Diaz sucks. I mean, yeah. [Conor] McGregor is barely the best in the world. I mean, the guy beat up Nate Diaz barely a couple of times and Nate Diaz himself is a very mediocre UFC fighter. There is no way you can argue that sentiment because all you have to do is look at [Diaz’s] record. The record shows he’s a very middle-of-the-road UFC fighter, he’s a 500 guy. He wins half, he loses half. Sure, he’s had some good wins, but he’s also had some terrible losses.”

Would you like to see @BenAskren bring his talents to the @UFC in 2018? pic.twitter.com/29mZfKTtWj

“And you know McGregor, he lands a couple of good punches against Eddie Alvarez. Is he good? Sure, but I’d like to see him defend his belt, he’s never defended his belt ever. But sure, if McGregor wanted to fight me – I don’t know, is he the best in the world? I guess, since he’s got the belt. Sure, if he wanted to come up and fight me. That’d be fine. He knows that’s a terrible idea, I know that’s a terrible idea. He’s not gonna do it. Let’s just stick with the gameplan and go with Georges [St-Pierre].” — Ben Askren speaking to MMA on Siruis XM.

Even if you don’t agree with Ben Askren’s critique of the caliber of fighters Nate Diaz and Conor McGregor are, it makes sense Askren would stray away from fighting them. While McGregor is the most popular UFC fighter in the world right now, he’s a career featherweight with one lightweight and one welterweight fight in the UFC. Diaz spent just six fights at welterweight out of 14 years and 31 fights. His fight against Rory MacDonald saw him being tossed around to a rough decision loss. Askren wants to prove himself against a true welterweight and not just any fighter, but the number one guy so there is nothing any detractors could say.

.@Benaskren tells @MieshaTate & @realOCsports that when it comes to a potential matchup with Conor McGregor in the UFC both he and Conor know that it would be a terrible idea for Mystic Mac to accept. pic.twitter.com/UNZDjcOQ0b