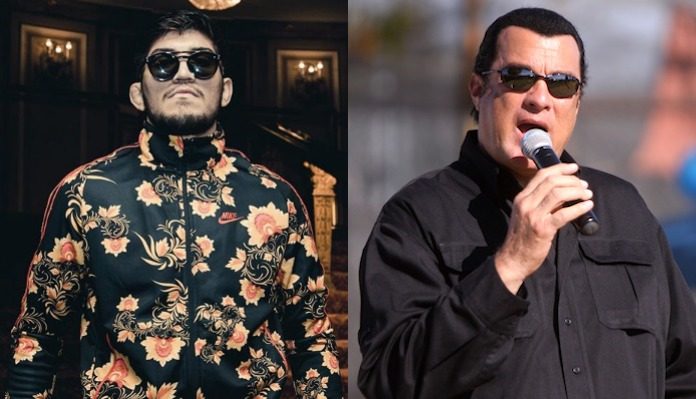 Earlier this week, actor and martial artist Steven Seagal told Submission Radio that he agreed with Khabib Nurmagomedov’s decision to leap over the cage and attack Dillon Danis after the UFC 229 main event.

“I thought that Khabib outclassed Conor in every way,” Steven Seagal began, discussing Nurmagomedov’s defeat of Dillon Danis training partner Conor McGregor. “I thought even in the stand up with the punching, he out-punched Conor. I thought his ground game was better. I thought that he was just a better fighter all around and I thought that he just really, really dominated Conor in every way and he won the fight fair and square. Do I condemn him for what he did after the fight? No. Even as a diplomat I will say no. If you badmouth someone’s family, their wife, their children, their mother, their father, their country, their religion, all bets are off, and I would have done the same thing.”

When Dillon Danis saw BJPenn.com’s report on Seagal’s comments, he asked Bellator MMA, the promotion he fights for, to set up a fight with the actor.

“Me vs seagal, seat it up Bellator,” Dillon Danis wrote on Twitter.

At the very least, Bellator acknowledged Danis’ request for a fight with Seagal, asking fans what they thought of the idea on Instagram.

So, how bout it. Who you got? Danis or Seagal?