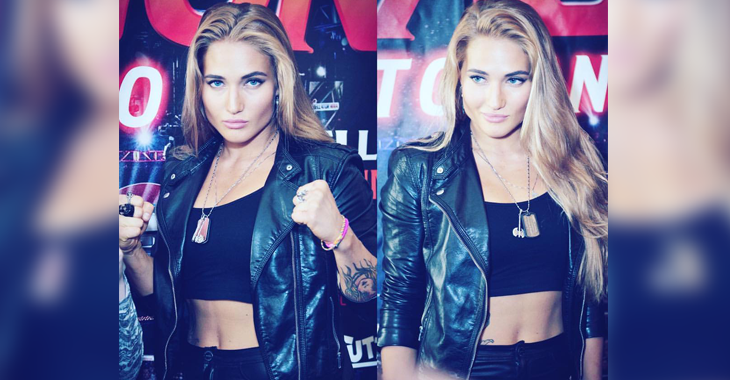 Up-and-coming Bellator standout Anastasia Yankova has the sexual attention of a fellow female fighter as well as throngs of online ‘weirdos’, all of which both bemuses and bewilders the Russian flyweight.

Yankova, (3-0), was the object of affection from fellow Bellator woman’s flyweight Ilima MacFarlane in an interview MacFarlane gave in July, and now appears to be attracting some bizarre attention from Russia to the U.S. as well.

“At first it was shocking,” Yankova said through a Russian translator during Monday’s edition of the MMA Hour. “There are a lot of weirdos online”

“The requests have been from ‘kick me in the groin’ to ‘can you sit on my lap?’ There’s an equal balance of weirdos in Russia and the United States.”

Prior to her online suitors, Yankova caught the eye of Ilima MacFarlane, who talked about “hidden sexual tension” between them in July:

“I think a win over Anastasia would definitely further my chances of making out with her,” MacFarlane said. “I’m not sure if my desire to fight her has more to do with my hopes for a title shot, or a hidden sexual tension I feel between us. Either way, I’m game.”

The beautiful 25-year-old Russian fighter responded to MacFarlane’s unusual comments about her as well.

“It’s really strange when she talks about me in interviews,” Yankova went on to say. “Using my name and sexual attention… I don’t want to make her more popular with my name. But, if she’s asking for a fight? I’m ready. Why not?”

Yankova is set to take on Veta Arteaga at Bellator 161 in Texas on Friday. Are you interested in a Yankova vs MacFarlane fight in Bellator? Sound off in the comments section, PENN Nation!