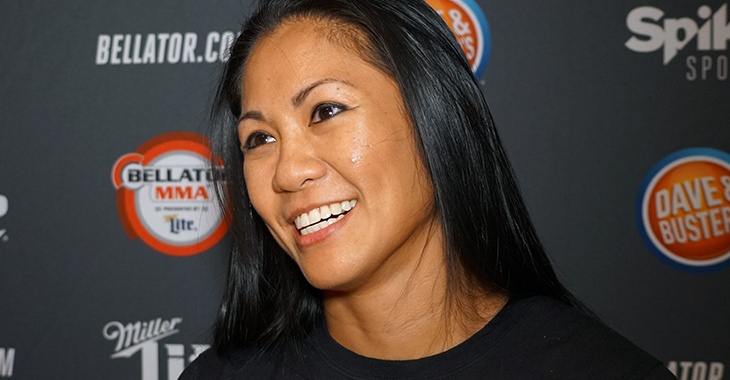 Ana Julaton holds a 14-4-1 professional boxing record and made the crossover to MMA in 2013 when she joined ONE FC and fought and defeated Aya-Saeid Saber by way of third round technical knockout. Julaton fought four times with ONE FC and went 2-2 before departing to the USA to compete in Bellator. She made her Bellator debut at Bellator 185 on October 20 and unfortunately lost a split decision.

Just one day after her fellow Boxer, Heather “The Heat” Hardy announced she has some fight news coming soon, Julaton did the same.

Is this pure coincidence? Both Julaton and Hardy fought on the Bellator 185 card and in the build-up to each of their bouts they were asked questions about the other and if they would fight and wanted to fight one another. Both fighters were open to it and it seemed like they were on a crash course to meet up assuming they both won so it’s hard to imagine that coincidence is all it could be. Just look at what they had to say, it speaks for itself(quotes from MMA Junkie):

“I believe Heather is avoiding me,” Julaton told The Telegraph. “She did in boxing. We both want the belt, but I want to fight her too. We will meet. She can run, but she can’t hide.”

“Oh, now it’s a fight that’s going to happen,” Hardy said. “It’s not down (the road) – it’s going to happen as soon as possible. I never had beef. I always respected her. When I started pro boxing, within that first year of me getting acclimated to the scene and learning the girls, she had made the transition over to MMA as a professional. To me, she was one of my idols – this was a world champion. She was so outspoken and eloquent for women.

“And now all of a sudden I’m reading this (expletive) about how I’m running away from her. I’m like, ‘Who the (expletive) is she? I haven’t even heard her name in eight years.’ Right now, the focus is on Bellator 185. We can talk more about this at the post-fight press conference (Friday).”

Despite them both losing at Bellator 185, a matchup still works out this way and is sellable and interesting to the public. Both are Boxing champions looking to rebound in MMA, both bring name value to the Bellator Flyweight division. The signs point to this being their next fight.