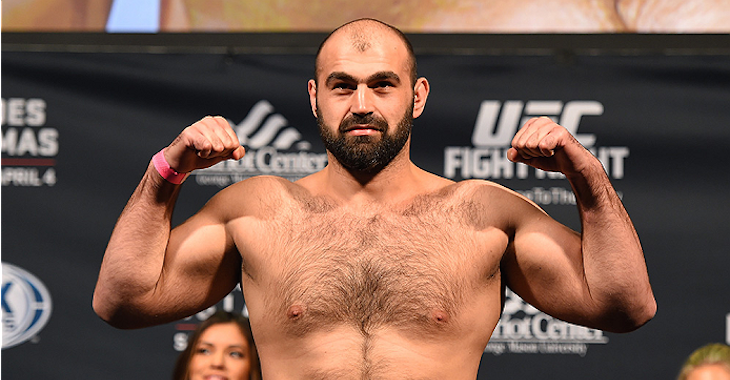 Abdurakhimov was able to catch Sherman with a solid left hook early in round one. Shamil would follow that strike up with a big right hand and then another left hook which sent “The Vanilla Gorilla” falling to his knees.

The referee quickly stepped in to wave off the fight and save Sherman from any further damage.

Get the full Shamil Abdurakhimov vs. Chase Sherman fight recap below.

Round one begins and Sherman attempts a low kick early. He is staying light on his feet. Abdurakhimov lands a left hand, but Sherman counters nicely with a right. Both fighters score with heavy punches. Abdurakhimov circles and then steps in and lands a massive left hook. Sherman appears to be staggered from that strike. Abdurakhimov leaps in with a big overhand right. The strike causes Sherman to spin around. Abdurakhimov lands a big left hook that drops Sherman to his knees. The referee quickly steps in and calls a stop to the bout. That may have been a bit of an early stoppage but Sherman was clearly in all sorts of trouble.

Shamil Abdurakhimov def. Chase Sherman via TKO just 84 seconds into the opening round.