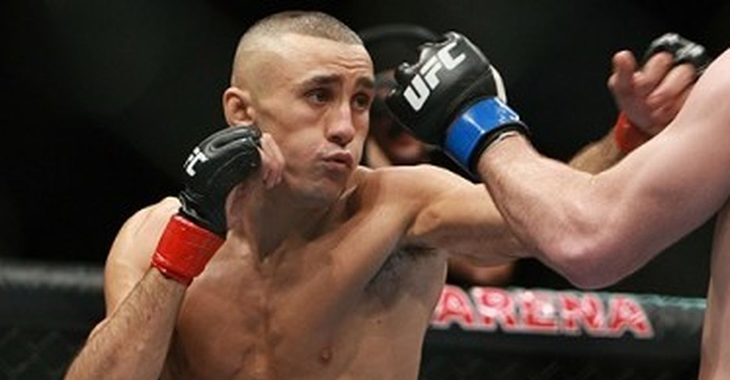 Former UFC lightweight fighter Terry Etim was hospitalized on Wednesday after allegedly throwing himself into multiple vehicles in his hometown of Liverpool, England.

The Liverpool Echo had the following details on the story after speaking with eyewitnesses from the scene:

It appeared he threw himself against as many as four vehicles, including three single-decker Stagecoach and Arriva buses. All except one were believed to be stationary at the time.

He was eventually restrained by police and taken to hospital, where he was identified as Terry Etim. His condition was this evening described as serious.

Eyewitnesses who work in a nearby parade of shops first became aware of a man running in and out of traffic and throwing himself against the windscreens of a number of vehicles, leaving him covered in blood.

Hairdresser Andrea McCullough witnessed the horrifying event and had this to say:

“It was one of the worst things I’ve ever seen.”

“His friends were running after him and trying to restrain him on the floor but he managed to break free and was running in and around all the cars. He wasn’t trying to harm anybody but himself. He was covered from head to toe in blood.”

Terry Etim (16-5) was last seen in action in November of 2013 under the Bellator banner, where he picked up a unanimous decision victory over Patrick Cenoble.

Stay tuned to BJPENN.com for further details as they develop.