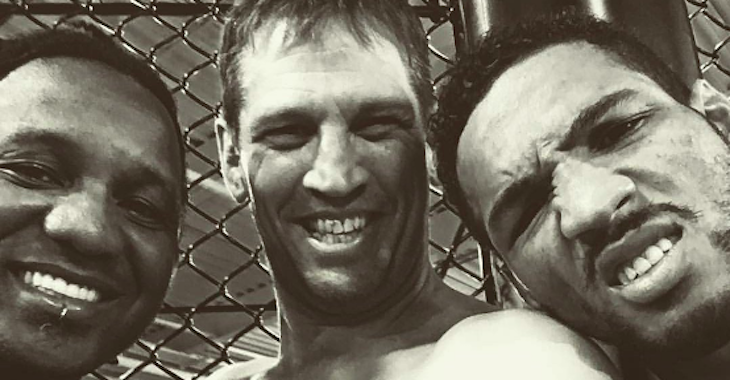 In the midst of the excitement of last night’s UFC on Fox 26 card, there is also some very sad news circulating in the MMA community. According to striking coach Dewey Cooper, who coaches a number of MMA stars such as Francis Ngannou, long-time Xtreme Couture coach Robert Follis has passed away.

A friend is a person who is there for you when you need an ear to listen or a shoulder to lean on. We are friends and I am terribly sorry that my ear or shoulder wasn’t enough to help you get through difficult times. We have love and respect for you Coach/Partner/Friend! Every MMA victory that our fighters have will always be a testament of your Great Coaching! You will be missed Follis; now get your gym in the Heavens up and running well!! This “Fight Thing” was a lifestyle for you; so it doesn’t stop after your physical life! Make sure you keep making Champions in the Heavens above bro!!! Until we speak again! Rest in Peace Robert Follis #RestInTheHeavensCoachRobertFollis #BKSS #follismma #MTP #noadlahat

For many years, Robert Follis served as a grappling coach at Xtreme Couture, the Las Vegas based gym founded by former UFC heavyweight and light heavyweight champion Randy Couture. Though he is widely credited with the team’s resurgence as one of the best in MMA, he recently parted ways with them to pursue other opportunities in the MMA industry.

Deeply saddened this morning to learn that Robert Follis has passed away. Truly one of the best coaches and one of the most kind, considerate men I have met in MMA, or any walk of life. May he rest in peace. And may all the fighters he impacted continue his fine legacy. What a loss.

Got word this morning that my longtime coach passed away.

Robert Follis was a special type of guy who always stuck with you. When I was badly injured, he encouraged me to keep studying fights on the sidelines, knowing it would take me somewhere. Thanks for everything, coach. RIP pic.twitter.com/I33FBkbVUZ

Can’t believe what I woke up to about Robert Follis. Truly a class act every single time I interacted with him. Great guy to be around and so knowledgeable. The MMA world will not be the same

Heart Broken to hear the news about Coach Robert Follis. My thoughts are with his family, friends, and the fighters he trained. I remember his voice during my pro debut as he coached against me, and how kind he was after the fight. He was a father/mentor to so many of his athletes. Coach Follis always made time to talk to me about his athletes and their development. The way he spoke about them was the way a parent boasts about their children. We lost a big piece of our MMA community. He was both a pioneer in the beginning of MMA and an innovator in today’s evolving sport. My heart is with Ed Herman, Ryan Schultz, Chris Leben, Meisha Tate, Tim Elliott, and so many other fighters who are devastated right now. We won’t forget you Coach Follis. RIP

At present, the cause of Robert Follis’ passing hasn’t been made public. Whatever the case, the team at BJPenn.com would like to send their sincere thoughts and condolences to the Follis family, and all those who have called him a coach and friend over the years.