Big things came from the press conference held by RIZIN today. The promotion unveiled their new logo, sponsor to the Rizin World Grand-Prix 2015, and a new fight announced to the fight card. 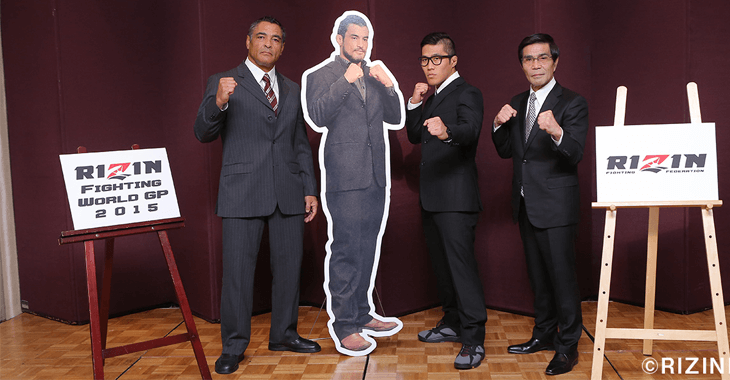 Rizin chairman Nobuyuki Sakakibara unveiled the official logo for RIZIN and also announced GYAO Inc. as the sponsor for the Grand Prix that takes place on Dec. 29 and 31.

Also in attendance for a fight announcement was Asen Yamamoto and his grandfather and former Olympic wrestler Ikuei Yamamoto, as well as Kron Gracie’s father and BJJ legend, Rickson Gracie.

“We have booked such a great fight. Kron Gracie vs Asen Yamamoto. This is a very dramatic and simple matchup for the viewers.” said GM of RIZIN, Nobuhiko Takada, and continued, “this fight has already created a different buzz and atmosphere that the matchups we have so far. Just imagining the outcome sends chills down my spine. Of course they are fighting as individuals, but also for their family. I want them to fight a fight where people will talk about years from now, for them, for their family and for their country. We, the Rizin team would also like to move forward in creating the future of MMA with these two.”

Asen said during the press conference, “Spectators may just think that this is a fight between two families, but for me, I don’t want to lose as a Japanese fighter, and as a fighter Asen, so my plan is to beat him up and get my hand raised.”

Ikuei also spoke about Asen’s background as a world-class wrestler and fighting spirit.

“Asen’s good part is that he never backs down. Ever since he started wrestling at the age of 3 and until he became world champion, he has never backed down. He traveled to Hungary and learned European style wrestling, and the spirit as a fighter. He also grew up in an environment surrounded by the Yamato Damashi spirit. The Gracie family is also an amazing family so I believe the fight is going to be an extremely exciting fight. I will observe this fight with my own eyes.”

Rickson spoke on behalf of Kron who is in training camp revealing his thoughts on RIZIN’s format.

“I would like to thank Mr. Sakakibara for giving me, Kron and the Gracie family to participate with Rizin. And I am very happy that Kron was given an opportunity to fight Asen. Kron is training hard and is in great shape so he will bring 100% to the ring. This fight will be a fight that will determine the future of MMA. The modern MMA rules take away the Bushido Spirit from the fighters by their short rounds and point system. And the cage becomes the 3rd element and takes away from realistic fighting situation. But Rizin will bring back the longer rounds and the ring with ropes. This will emphasize the fighters to finish which will bring back the true warrior spirit to the fighters and I am very happy for that.”

Kron left a message by video that was played at the press conference where he said, “Asen is a tough wrestler, he’s a young up and coming kid. Kind of like me. But the opponent really doesn’t matter, because my opponent is always the same, which is my mind.”

Asen commented after viewing the video played, “Kron is the world’s top grappler and I respect him for that. But once we get in the ring there is no friendship, or anything. If he is coming to fight me with his head, I will fight with my heart. I will give him everything I have to crush him.”

Who takes the match between the two legendary names in the sport of fighting? Will the Gracie name claim victory over the Japanese wrestling roots? Let us know who you got in the comment section below!