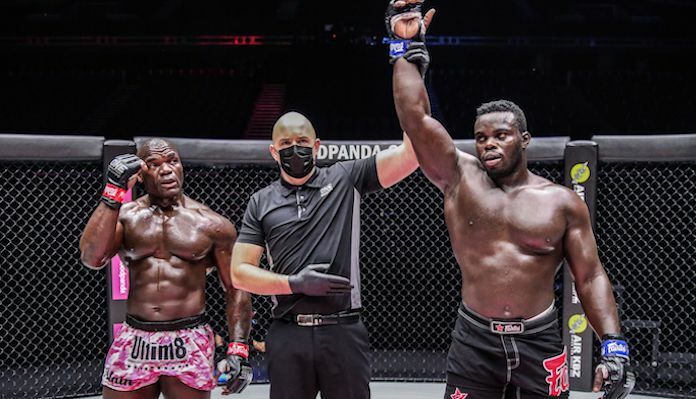 Oumar Kane, better know as Reug Reug, moved to 2-0 with ONE Championship thanks to a brutal finish during ONE on TNT 1 last night.

It’s been well established within the mixed martial arts sphere that Reug Reug is a force to be reckoned with for quite some time now. From his power to his incredible physique, he seems to be one to watch at heavyweight moving forward.

There was a great deal of hype and anticipation surrounding his fight against Patrick Schmid last night and in the end, it turned out to be a pretty comfortable day at the office for ONE’s rising star.

Some will argue that his technique hasn’t quite been fully developed and he needs more time to really grow as a fighter, but at this point, ONE Championship clearly has a potential superstar on their hands.

He’s already been a viral sensation once or twice and the hope is that he can continue to build on that and grow into one of their most marketable stars.

Reug Reug’s performance was considered to be one of the biggest positives coming out of the ONE on TNT event with many being left to question the controversial ending to both Eddie Alvarez and Demetrious Johnson’s fights.

The next few cards also seem to look pretty exciting with the hope being that ONE Championship can begin to gather some momentum and establish themselves as a new player in the North American MMA scene.

If someone like Reug Reug is at the forefront of those plans, then we’re pretty sure folks will tune in to watch.

Just how far up the ladder can Reug Reug go in ONE Championship? Could he eventually go on to become a legitimate title contender at heavyweight? Let us know your thoughts down in the comments, BJPENN Nation!