It has been a memorable year for Thailand’s Stamp Fairtex. The 21-year-old claimed the ONE Kickboxing Atomweight World Championship in her promotional debut in October at ONE: KINGDOM  OF HEROES and her star looks set to shine even brighter in 2019.

Stamp comprehensively outpointed defending champion Kai Ting Chuang throughout their five-round contest on her way to earning a unanimous decision victory. It was the co-main event of the evening and was watched by millions worldwide.

“I feel very happy and never thought that many viewers [would see me compete],” Stamp said in a recent interview.

Stamp is now back in the gym, working on improving all aspects of her game, and lately has been focusing on developing her Brazilian jiu-jitsu skills. 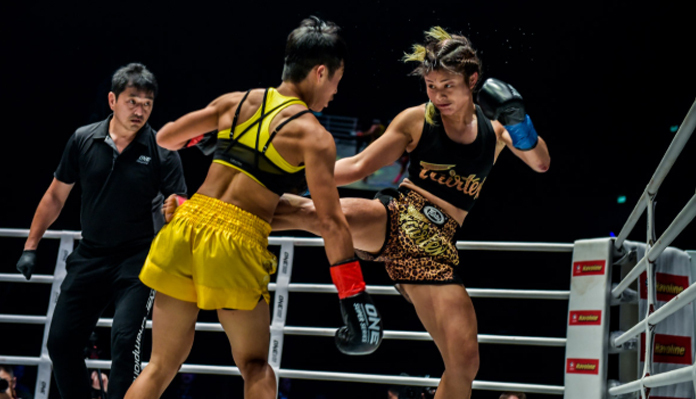 The reason behind this is because one of Stamp’s stated aims is to become the first female Thai athlete to win a ONE Championship World title in both kickboxing and mixed martial arts. Stamp also holds ambitions to further her academic education and will study for a Bachelor’s Degree in 2019.

While Stamp has a lot going on her life, it is apparent when she talks about her goals and aspirations for the year ahead that she would not want to have it any other way.

“I think everything in my life is exciting and nothing is certain at the moment, which is exciting for me.” Stamp said.

Stamp, who started out competing as a five-year-old in her native province of Rayong, has become a role model for other young women, both in Thailand and around the world, who dream of following in her footsteps.

To those young women, she has the following words of advice.

“What I want to say is that no matter what you do, remember don’t give up, don’t be discouraged with the obstacles in your life!”

“No pleasure without pain, no rose without a thorn, nothing is difficult to the person who will try.”

Stamp herself is a living testament to the ideas she shares. When she started out competing she had to overcome the stereotype that it was unladylike for Thai females to compete in Muay Thai. Undeterred by what others thought  Stamp followed her dream and spent hours in the gym developing her abilities.

Her hard world paid off, and she became the first female Thai athlete to be sponsored at the world-renowned  Fairtex Training Center in Pattaya.

It is an inspirational story that everyone regardless of age and gender can learn from and what makes it even more exciting is that Stamp’s story is far from over.

Fans will look ahead to 2019 in anticipation of just what this talented young athlete will do next.